The development of scripts is closely linked with the "secondary products" revolution: wool, clothing, metals, honey, bread, oil, beer, textiles, garments, rope, mats, carpets, furniture, jewelry, tools, perfume—all of these things and many more needed to be accounted for. The number of types of tokens in use ballooned to 250 by 3300 BCE.

Most alphabets of the world are derived from the Egyptian syllable-extended alphabet and/or the pure Ugaritic alphabet of 1400BC. The brilliance of the Egyptian alphabet is that they uses common Sumerian signs and applied them in a free standing, non determinant way.

We mostly follow the conventional reading of the signs, with the exception of letter 'f' pth 𓆑 vs 𓇋e.

The following are the most frequent signs of the hieroglyphics ordered by the modern roman alphabet. For the complete sign list see Gardinger signs. You can search and enter those signs with the online Dictionary/Keyboard

This list is obviously a modern arrangement, what constitues a letter in the Egyptian Alphabet was not as clear cut: Many signs for prefixes, infixes, and suffixes had phonetic values. Determinants could appear in different places with often unknown influence on the phonetics of the word.

Few of these would be counted towards an alphabet proper. Arguably only 𓌳 𓐝 … ?

Only prefix / suffix ( but with vastly different semantics ) : 𓐎 𓐡

The coherence of signs, meaning and 'cognate' sounds is striking, but if nothing else these are excelent mnemonics.

Each and every letter of this alphabet had an enormous influence on neighbouring countries and cultures.
In fact around the time of the Bronze Age collapse ⋍1200BC the convergence with Akkadian and Ugaritic cuneiform becomes noticeable, especially Ugaritic looks almost like the Phoenician alphabet put into stone.

Even in its early form, the Egyptian hieroglyphics system was 'almost alphabetic'. A quite small and easy to learn system of syllables, at least compared to Chinese.
The exact phonetic values are impossible to reconstruct, but comparative linguistics can give estimates for the dominant dialects. Even at the time when this language was still spoken most letters were clusters of similar sounds (see different values of 'a' in 'man','made','master',…)
For example many Egyptian words which have the character '𓃀' now have a 'b' in its derived coptic forms, or similar bh,ph,p,v,f sounds in modern variants of the word '𓃀' (all meaning ⋍leg)

Dr. Christian De Vartavan did fantastic work reconstructing the pronunciation of the late stage of Egyptian. We take a somewhat different approach and try to reconstruct the early/middle forms of the signs when they were optionally readable as Complete Words, before they were reduced to syllables and phonemes.
It is admitted and obvious that the consensus mechanism went a bit too far: many words in dictionaries are reduced to the common denominator and just sequences of vowels a-a-a, etc. Thus while it is custom to treat determinants as silent signs, we treat them mostly as voiced infixes / suffixes.

In some cases both approaches seem legitimate, in others it seems more natural to include the suffix:

Through contract with demotic priests, medieval Arabian scholars Al-Idrisi (Anwar: 100f) and Al-Qalqashandi (Subh 3: 20) knew that the ancient Egyptians, whom they call al-qibt al-awal, had 32 to 36 letters in their alphabet. They both referred also to the fact that Coptic was linked to the ancient Egyptian language by calling the latter al-qibitiyah al-ula (the First Coptic). Source: ancient-egypt-in-medieval-arabic-writings

Signs which appear outside their deterministic context and are thus used as letters or syllables are listed in the extended alphabet.

The use of the Egyptian extended alphabet surely led to shifts in the spoken languages via phenomena such as https://en.m.wikipedia.org/wiki/Spelling_pronunciation

Recent research shows that knowledge of the Egyptian alphabet and its phonetic values was never completely lost and European scholars in the 19ths century might have drawn on Arabian sources:

See Subtleties for series of ever so slightly different signs. 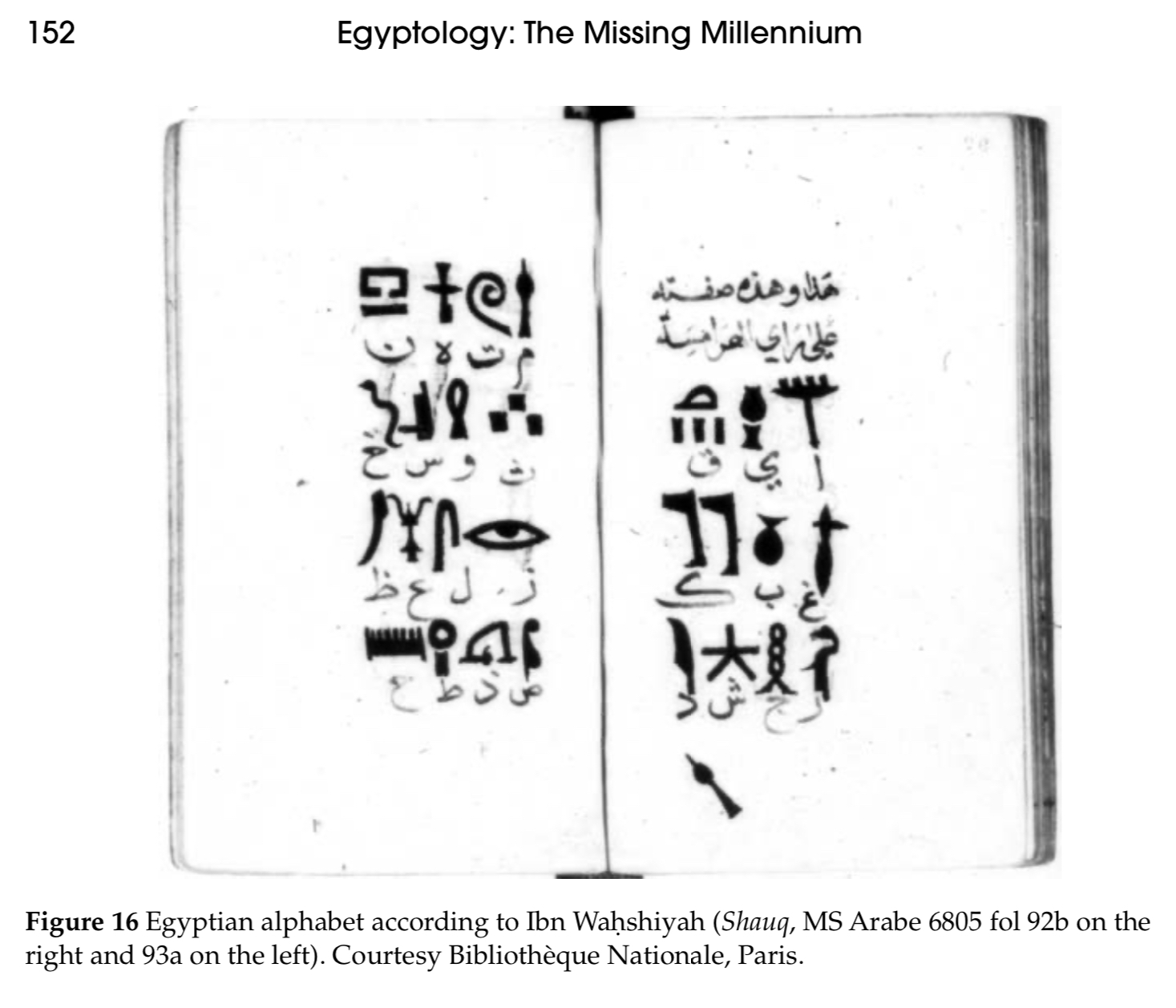