What is a Wall?

Walls are fairly straightforward and creating a ModWall is mostly an exercise in following the existing patterns. Like tiles, walls are comprised of 2 parts, the ModItem that places the wall, and the ModWall itself.

ExampleWall in ExampleMod is a basic example. It has 4 files:

The texture for a wall has several sections for drawing the wall in different positions depending on which neighbors are the same wall type. Notice how for each orientation, there are 3 options. The sections are referred to as "style" and the options are referred to as "WallFrameNumber". ExampleWall is based off of Gemspark walls since it is simple to comprehend. Consult other existing wall textures for more detailed examples.

If Main.wallLargeFrames is used, a 4th WallFrameNumber is added to the mix for each style to add even more variety. That template is shown here: 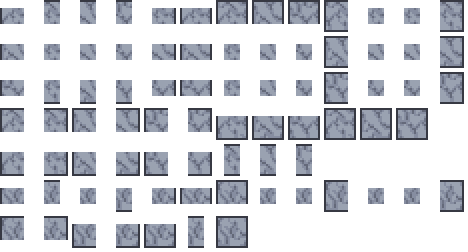 If the wall is animated, the pattern is repeated. This is only supported for non-Main.wallLargeFrames walls. 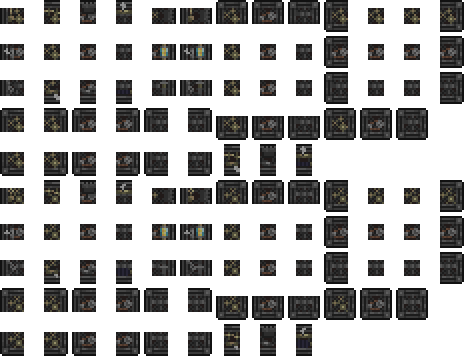 In ModWall.SetStaticDefaults, various data can be assigned to affect the behavior of the wall.

If true, the wall is considered a safe wall, used for various things.

If true, the wall is considered a dungeon wall.

If true, light flows in from the background, such as fences and glass.

Assign to a known WallID to blend with similar walls.

As seen above, the texture for animated walls has several copies of the template. The wall will animate in accordance with the timing and pattern provided in the ModWall.AnimateWall hook.

This example loops 7 frames of animation, switching frames every 10 frames. A cycling or more advanced pattern can be made with some effort.

Many Terraria walls have safe and unsafe variants. The safe wall variant is the wall placed by the item the player receives when mining the unsafe wall. The unsafe wall is placed during world generation and usually can't be placed by the player. The unsafe wall is used in NPC Spawning calculations. This separation lets players mine walls and use them for decoration without risking enabling various enemies from specifically spawning in their creations. As a mod developer, this pattern is good to follow if NPC spawning logic takes wall types into account.

With ModTile.WallFrame, a modder can implement whatever framing logic they desire. This example from ExampleWallAdvanced shows weighting the 1st option more than the other 2 options:

Here is the comparison between this example and WallID.Cog, which has a similar texture, note how rare the WallFrameNumber 0 is:

Don't use for Game Logic

Make sure not to use wall framing for game logic, only visuals. Wall framing is not synced and each player sees their own pattern of wall framing.

This is the end of the page. Back to the top.