A new user signs up for an account and wants to create a new group to share with their friends. They also want to look for a group that organizes rides to Tofino.

The user now wants to create a ride from their home to Tofino on March 15th, leaving their house at 2pm. They own a Toyota Corolla (5 seats) and are driving their friends.

The user now wants to join a ride created by a friend. The friend has sent them a link to a group that contains a ride for the Langford bowling alley. They are joining as a passenger, but they want to communicate they are making sandwiches for the trip. They want to ask the group if anybody has any specific allergies so they can plan their sandwich making.

Create a group with a ride to Langford bowling alley. Generate a share-link for the group and give it to the user. Text the user back on the app when they ask for allergies.

Our first question asked users how often they carpool currently. This question was meant to get a baseline of how familiar people are with the idea of carpooling. 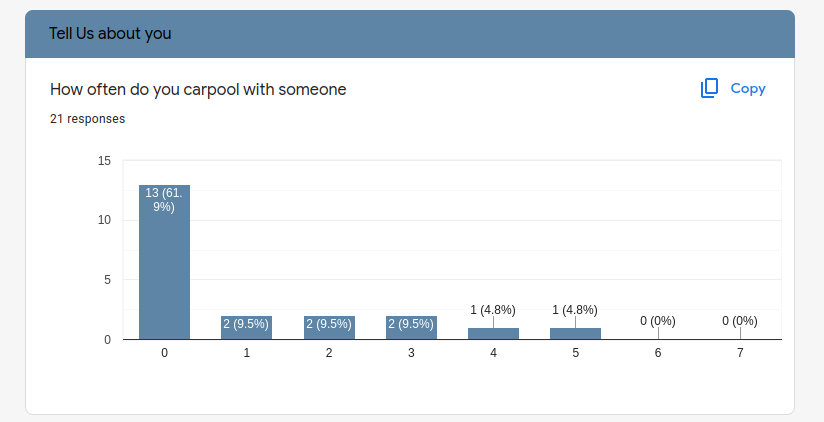 The second question provided more context by asking if the user owns a car. The feature requests will probably be different for drivers and passengers so it's important to know what side they are on.

The third question was the main focus of the survey. After users tried the app, it asked them to choose which feature would give the best experience improvement. 5 choices were given to the users who assigned them a ranking from favourite to least favourite. 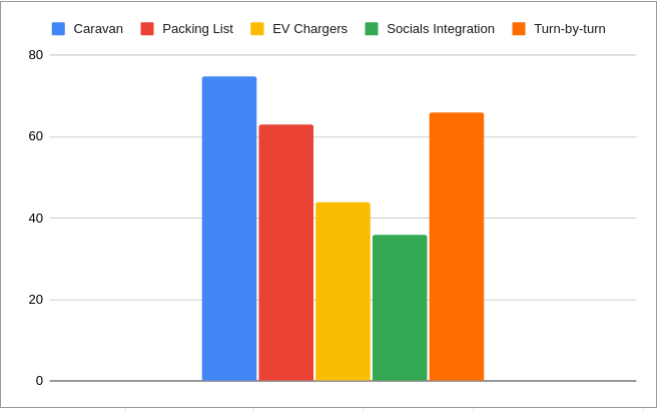 Multi-car rides received the highest score so that will be our next major feature.

Our next question asked users to suggest their own feature they would like to see in the app. Since these are one-off ideas we are not going to implement these immediately, but it gives a direction for possible inquiry in the future. Some ideas include the following:

Next we wanted to determine what parts of Tandem are working well and what needs to be improved. We asked the users what they liked about Tandem and what they found challenging to use. What do you like about Tandem?

What challenges did you have while using Tandem?

Next we asked people how much they would be willing to pay for the app. We figure that the app has more value if more people use it (since there are more people to participate in rides), so we wanted to confirm that our business model should not be a subscription model where everybody needs to pay equally.

The results confirm our hypothesis, so we will continue pursuing a model where people pay what they can.

Our last section asked for some demographic data from the users such as Name, Age, and City they live in. Our privacy agreement prevents us from sharing this data directly, but we can show generalized results. This section was used to determine if our surveyed users were in the target demographic for this application.

All surveyed users were in Western BC, but we will not share exact cities or their names.