This is accurate as of USI Kolonization Systems (MKS) version 1.4.1

The Tundra series contains larger, more permanent parts, that can be used for planetary or orbital stations. Many of the components come in both a 2.5m and 3.75m configuration.

The parts can be found in the VAB and SPH in several locations: 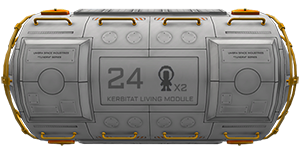 Many of the Tundra parts are modules that have the same form factor. The only external differences are the number and image shown on the side, and some come in more than one size. Each module provides specific services and some can be configured to perform different operations. They can be connected sing the various hubs and stands, as shown in these examples:

These are the primary parts that are used on most bases, supporting the key MKS goals and allowing parts to be connected. They are found in the Kolonization tab in the VAB and SPH.

Two variants of the truss are provided. The larger MultiTruss has two connection points on each side while the smaller MiniTruss has a single attachment point on each side.

Note that as of KSP release 1.10, MKS uses the stock welding capabilities to attach items.

Two endcap adapters are provided for merging modules of different sizes. These are used for aesthethic purposes, not functional.

When you have to branch your base out, use this hub to link trusses and other modules. Suitable for Tundra-250 modules and other base components.

The MKS Tundra Agriculture module can be configured as an Agroponics Unit, Cultivator, or Agricultural unit, allowing a variety of configurations to produce supplies and/or organics.

There are two airlocks provided: The larger can be thought of as a separate docking module, complete with waiting area for four Kerbals. The smaller (mini) version is a simple in-and-out affair for one Kerbal at a time.

The 3.75m Module can enable 'Kolony Growth'. This will generate a new Kerbal every 450 days so long as the module is active, you have crew capacity, and have at least one male and one female kerbal in your base.

An expandable module that can be configured as agricultural space or living space.

There are two sizes of the Expandable Habitats, 2.75m and 4.25m, which represent their expanded sizes. These equate to 2.5m and 3.75m launch sizes, respectively. These modules can only be expanded by a Kerbal on EVA when sufficient ElectricCharge and MaterialKits are present.

All of the comforts of home in a convenient, expandable package. Not for use as a bouncy castle. Can be configured as agricultural space or living space.

This module can only be expanded by a Kerbal on EVA when sufficient ElectricCharge and MaterialKits are present.

An expandable module that can be configured to store a variety of resources.

There are multiple configurations for the ISM, each with a different set and ratio of resources, as shown below. The numbers are the storage(t) when the ISM is deflated. Multiply by 1,000 for the inflated numbers.

The MKS Kerbitat crew support module can be configured as a life support recycler, crew quarters, or outfitted with comfort and exercise features to make your Kerbal more comfortable.

When mishaps befall your Kerbals, or when Kerbals become homesick, simply transfer them into the medical bay, and any scientist on your crew can help them become happy and healthy again. Only works on Kerbals inside of the module, consumes ColonySupplies.

Designed to be one of the first parts of a long term colony, the Pioneer module features local logistics capabilities, basic training facilities, recycling facilities for life support, KerbNet access, and survey station capabilities for off-world construction. Includes Logistics functionality that allows the vessel (and the resource warehouses attached directly to it) to participate in planetary logistics, taking or storing resources in planetary stockpiles.

This module is outfitted to provide long range power distribution, including large battery stores, and a small nuclear power plant. Radiators not included.

A field training center for training your Kerbonauts. When training is conducted, attendees will gain experience based on the instructors present, and in their chosen field. Up to one star when used on Kerbin, two stars while in orbit, and three stars if training takes place landed on another planet or moon.

When working with parts that have dynamic nodes, such as the MKS Tundra model, use this node to 'block' nodes that may be improperly selected during construction. Remove once done.

These parts support the operations of the primary Tundra parts and are found under the Manufacturing tab.

The Agricultural Support Module is designed to support off-world farming on an industrial scale, with three configurable bays that can be set up for fertilizer generation or water extraction from a variety of materials.

An off-world manufacturing facility, capable of creating a variety of finished goods.

A large refinery designed to support off-world resource exploitation on an industrial scale, with three configurable bays that can be set up to refine a variety of resources into useful products.

Designed to take in vast amounts of dirt and extract it's useful contents, this industrial sifter redefines the meaning of 'Resource Exploitation'

This workshop module is suitable for small-scale fabrication. Can also help increase efficiency when combined with a larger MKS Fabrication Module.

A large, mobile recycling plant that can take broken parts and other recyclables, and reclaim a portion of their raw materials.