This guide will give you a rundown on how to configure HWiNFO for use with Sonder. HWiNFO is a free, highly flexible system monitoring tool, which Sonder utilizes to gather CPU temperatures and GPU information. Due to a recent change in the latest version with a 12hr time limit on shared memory, downloading V6.42 is currently recommended until I update/re-write Sonder for V7. Click here to download the latest version if you wish to purchase the Pro version of HWiNFO.

Once HWiNFO is installed, run it and click Settings in the welcome dialog. Configure your options as shown below. Pay extra attention to the highlighted options - they're very important! 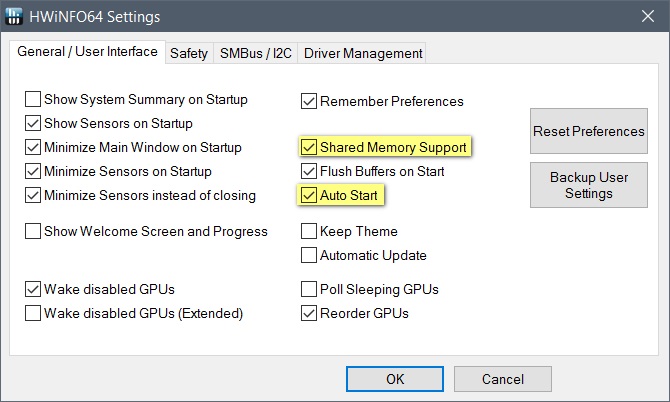 Once this is done, click Ok, then click Run to run the program. If you configured it as per the above image, HWiNFO will automatically start every time you log in. Please keep in mind that Rainmeter might load before HWiNFO, so don't fret if your gadgets display HWiNFO connection errors when you first log in. They will refresh automatically once HWiNFO is up and running.

The HWiNFO plugin itself uses hexadecimal sensor IDs to determine which readings to use. These IDs need to be manually configured by the user in order to work properly. If this is your first time using Sonder, it is a good idea to go through the configuration process even if the gadgets appear to be displaying correct values. And obviously, if the gadgets are displaying inaccurate values, you need to go through the process as well.

For this example, we will be configuring the GPU Temperature for GPU Meter. Open the GPU Meter settings skin and click the Open Shared Memory Viewer button.

On the left side, you will see a list of all of the sensors that HWiNFO has available. On the right is a list of sensors needed by Sonder. HWiNFO Configuration consists simply of selecting an item on the right side, finding the corresponding sensor on the left, and clicking Update to write in the IDs.

For this tutorial we will only be worrying about the GPU0 tab. If you are using multiple GPU Meters to monitor a multi-gpu setup, simply configure the values in the corresponding tab of the SMV for each GPU Meter.

Once you have found the GPU Temperature in the list of HWiNFO sensors, click it, then click the Update button in the lower right-hand corner of the SMV. This will update the hexadecimal values needed for that sensor.

Repeat this process for each of the sensors in the list on the right. If you find that you don't have one of the sensors, simply skip it, then disable that part of the gadget in the gadget's settings skin. Once you have finished, close the SMV, and click the refresh icon next to the HWiNFO tutorial button to refresh the gadget.

Each gadget that uses HWiNFO will have an Open Shared Memory Viewer button in its settings skin. Make certain you configure all of the gadgets that use HWiNFO.

CPU Meter supports any number of threads, up to 64, depending on what CPU you have. Because of this, you will need to input a separate entry ID for every physical core. However, most CPUs these days are hyperthreaded, meaning that what shows up in CPU Meter as 2 cores is really only 1 core. Thus, there is a high chance that you will only see half the number of cores that show up in CPU Meter, in the SMV. This is perfectly normal, and you only need to configure the threads that are in the SMV.

HWiNFO has a vast multitude of sensors, and sometimes those sensors can change without warning. I myself have had my GPU sensor instance change 3 times since I started using HWiNFO. If the gadgets begin displaying zeros or values that don't make sense, go through the configuration process again to make sure nothing has changed.

If it is still not working, double-check that you have configured HWiNFO itself as described above, and make sure it is actually running.