In the first standup with Justus we discussed what we wanted to do as a team and what our plan was. We discussed the results of the experiments we had done so far and what else we needed from Justus. As a result, we have made team agreements based on the Team canvas below. 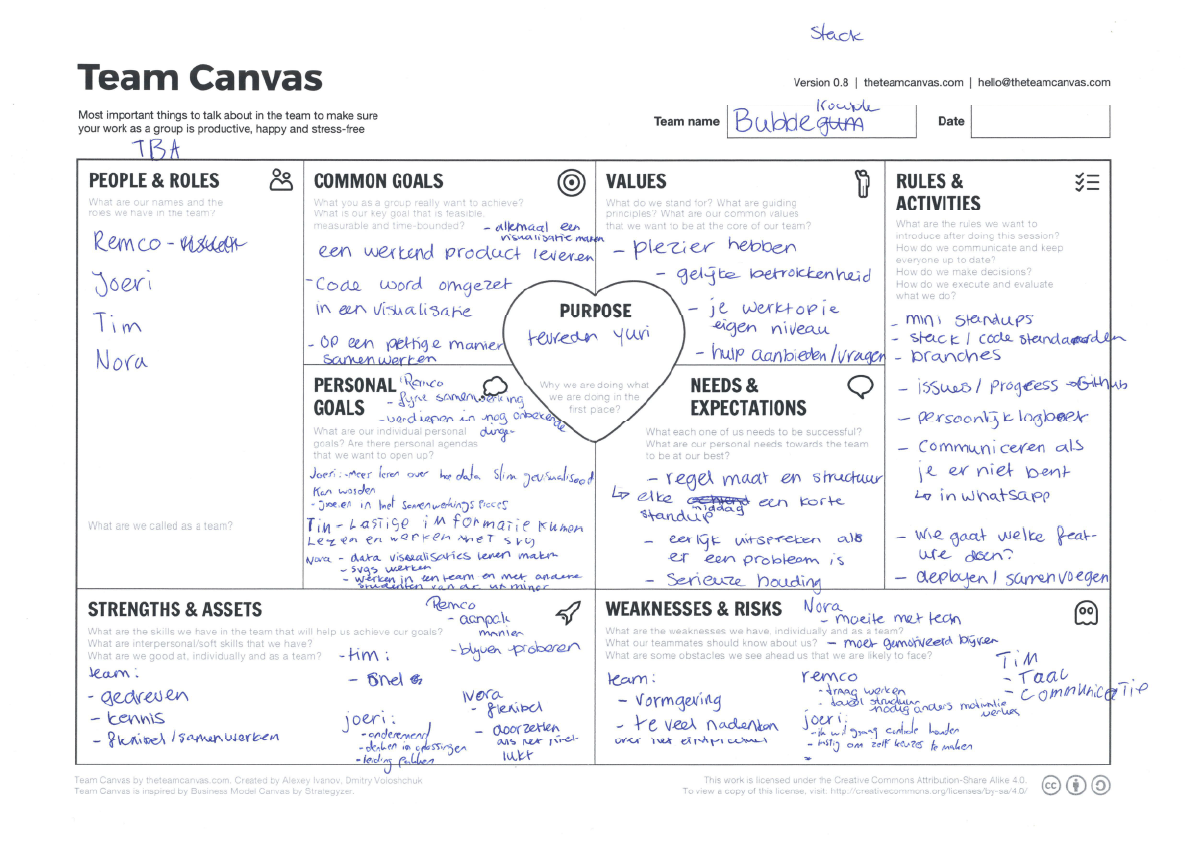 We also indicated that we would like an explanation about D3, Justus would come back to this later. We also received feedback that it is good that we are already exploring and that we should definitely continue with that for this week, we also had to get out of our minds that we would already come to an end product.

In the next week we've looked at the first design, Justus was impressed with the amount of work we've already did and complimented us on our Github Project board. Justus advised us to convert the results of the experiments from the first week into concrete steps and also converting this into issues. By working this way, small targeted iterations can be made without losing the overview and purpose of the project.

In the standup we indicated that we found it difficult to achieve an equal division of tasks. This is because the work that had to be done till now is difficult to do together.

Justus gave feedback that it would be best for us to continue as a group because there will still be plenty to do. In order to achieve a good division of tasks, he referred to the Project board and recommended that we do a standup every day to discuss the division.

In the third week Justus took the time to explain D3, with a presentation it became clearer on how to approach D3 en create workable graphs. For Joeri in particular this was very useful. The key is to find a graph that uses the same dataset as we're using. The feedback he gave was the we need to look at the data and not as much at the D3 code. If the data doesnt apply to the D3 graph you need to concat the data to an other form that will apply.

In the fourth week we've got feedback on the prototype so far and on our documentation. For the prototype we've got positive feedback, it is working and it looks good. The things we must do now is to add the onboarding so the prototype will become more usable for the user and repair the minor bugs thats still occur.

On the documentation we've got the feedback that we must cover everything we've done. And more important document everything we didn't do. This will add up to a good handover with the client. Because other people will work further on this project its important to make sure that everything is clear to the next developers.

The was the last standup of the Meesterproef. Because Justus couldn't make it to the TTH we did an online standup via Teams. The stand-up had a positive outcome. Together we looked at the projects board and concluded that almost all Must Haves were now ready. The feedback Justus gave us was that we should keep the focus on completing the project, this means:

Further feedback we got from Justus was that we had to make the Design, made by the UX'ers, ​​our own. This will lead to a better consistency in the prototypes.