*hsmcpp allows to use hierarchical state machine (HSM) in your project without worrying about the mechanism itself and instead focus on the structure and logic. I will not cover basics of HSM and instead will focus on how to use the library. You can familiarize yourself with HSM concept and terminology here:

Since Finite State Machines (FSM) are just a simple case of HSM, those could be defined too using hsmcpp.

Here is an example of a simple HSM which only contains states and transitions:

Events are defined as an enum:

They could be later used when registering transitions. 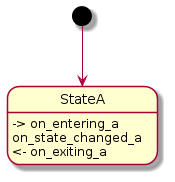 States are defined as an enum:

State callbacks are optional and include:

Assuming we create HSM as a separate object, here are possible ways to register a state:

Note that if you explicitly need to pass nullptr (as in the last example) you will need to provide class name as a template parameter.

Besides implementing logic inside HSM callbacks it's possible to define some operations as state actions. These actions are built-in commands that are executed automatically based on HSM activity.

Actions could be added using:

At the moment two triggers are supported:

Note: actions will be executed only if ongoing transition wasn't blocked by entry/exit callbacks.

See Timers chapter for details regarding their usage.

Transition is an entity that allows changing current HSM state to a different one. Its definition includes:

HSM applies following logic when trying to execute a transition:

It is possible to define multiple transitions between two states. As a general rule, these transitions should be exclusive, but HSM doesn't enforce this. If multiple valid transitions are found for the same event then the first applicable one will be used (based on registration order). But this situation should be treated by developers as a bug in their code since it most probably will result in unpredictable behavior.

To register transition use registerTransition() API:

By default, transitions are executed asynchronously and it's a recommended way to use them. When multiple events are sent at the same time they will be internally queued and executed sequentially. Potentially it's possible to have multiple events queued when you need to send a new event which will make previous events obsolete (for example user want to cancel operation). In this case you can use transitionWithQueueClear() or transitionEx() to clear pending events:

Keep in mind that current ongoing transition can't be canceled.

Normally if you try to send event which is not handled in current state it will be just ignored by HSM without any notification. But sometimes you might want to know in advance if transition would be possible or not. You can use isTransitionPossible() API for that. It will check if provided event will be accepted by HSM considering:

Sometimes transition should be executed only when a specific condition is met. This could be achieved by setting condition callback and expected value. Transition will be ignored if value returned by callback doesnt match expected one.

Ideally, when designing state machine, you should avoid having multiple transitions which could be valid at the same time. This will make understanding the logic and debugging easier. But if for some reason your state machine will contain such transition, hsmcpp library will still handle them in a deterministic and predictable manner: 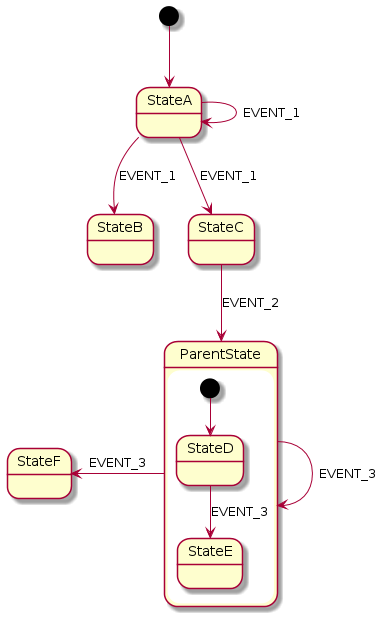 Transitions can be executed synchronously using transitionEx() API. It was added mostly for testing purposes (since async unit tests are a headache) and is strongly discouraged from usage in production code. But if you *really have to then keep these things in mind:

Up until now our state machines were handling a single state at a time and no more than one state could have been active at any given moment. That's easy to define and handle, but imagine that we are using HSM to define behavior of a system UI and have the following requirements:

Since any two of the 3 defined UI applications could be active at any given time we would need to create 3 separate HSMs to handle their logic separately. Sounds a bit inconvenient, but still ok at this point. 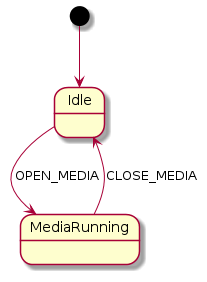 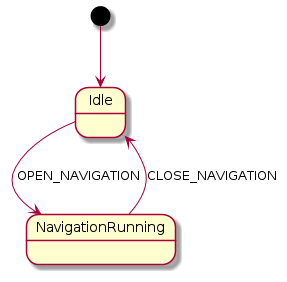 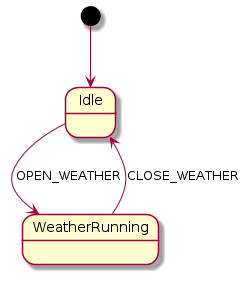 But what if eventually our requirements get extended and now we also need to add interaction between these apps? For example, ability to open weather forecast from Navigation. At this point, things will start getting messy since we will have to manually synchronize 2 separate HSM in code.

All of this could be avoided by using the parallel states feature. Essentially it allows HSM to have multiple active states and process their transitions in parallel. 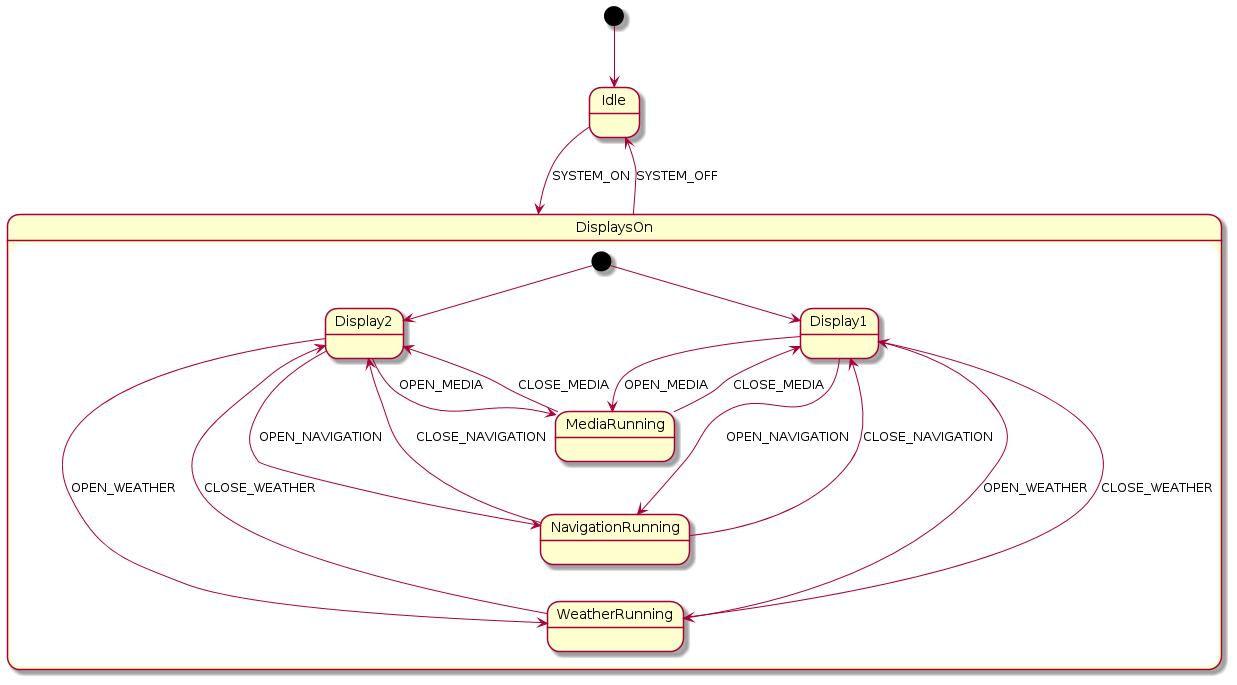 This structure can be achieved by simply defining multiple transitions which will be valid at the same time:

When defining HSM in SCXML format you can also use tag. This approach is a bit more restrictive and was added mostly for compatibility with SCXML format specification. Here is an example from Qt Creator:

*Note: it's important to understand that all transitions and callbacks are executed on a single thread. If you need actual parallel execution of multiple state machines then you would need to create multiple event dispatchers and handle such machines separately.

Imagine we have the following state machine: 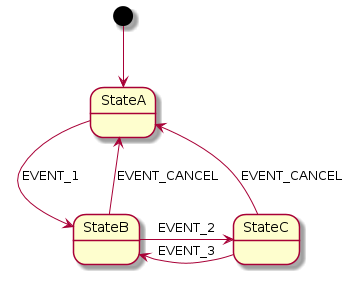 In this example EVENT_CANCEL must be added for any state except StateA. With increasing complexity of your state machine, this can become a significant issue for maintenance. So such logic could be simplified using substates: 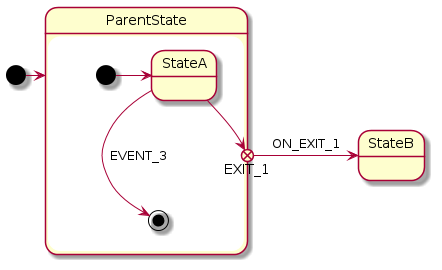 Substates allow grouping of states to create a hierarchy inside your state machine. Any state could have substates added to it on the following conditions:

Entering a substate is considered an atomic operation that can't be interrupted.

Note that *ParentState must be a part of *MyStates enum as any other state.

If you define multiple entry points without any additional conditions they will automatically become parallel states and will get activated as soon as HSM transitions to their parent state.

It's quite common to have multiple ways to enter a parent state. But sometimes you might have a situation when you would want to have a different entry state depending on the triggering transition.

This could be done by specifying multiple entry points with conditions. 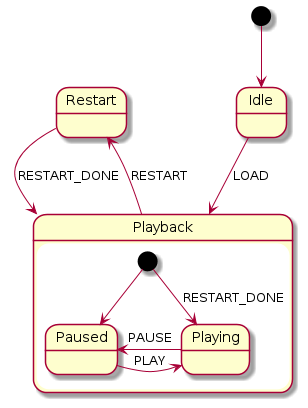 When determining which entry point to activate hsmcpp follows these rules:

Here is how above example will treated by HSM: 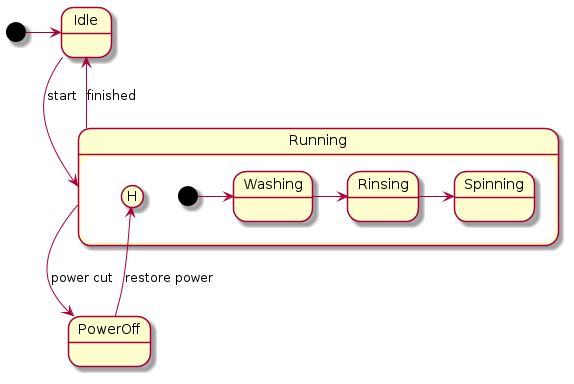 In this state machine, when a washing machine is running, it will progress from "Washing" through "Rinsing" to "Spinning". If there is a power cut, the washing machine will stop running and will go to the "Power Off" state. Then when the power is restored, the Running state is entered at the "History State" symbol meaning that it should resume where it last left-off.

Each history state can have default transitions defined. This transition is used when a composite state had never been active before (therefore it's history being empty).

Two types of history are supported:

A shallow history is indicated by a small circle containing an "H". It applies to the state that contains it.

Let's look at the example. Let's say we have this state machine with *StateE being currently active:

Since we are using shallow history type, HSM will remember Parent2 as a history target for Parent1:

Since Parent2 has substates entry transition will be automatically executed and StateC will become active:

Deep history is indicated by a small circle containing an "H*". It applies to the state that contains it.

Let's look at the example. We have exactly same state machine, but now history type is set to "deep":

While moving to StateD, HSM will save *StateE as a history target for Parent1:

So after E2 transition to history state, our HSM will look exactly same as it's initial version:

Timers are used to initiate transition logic from within HSM without any additional code. Some common examples of timers usage are:

To use a timer in your HSM you first need to register it using this API:

Interacting with timers is part of State actions so registerStateAction() API should be used. You can start, stop or restart any of the registered timers.

Due to C++11 not having std::variant type, HSMCPP comes with it's own implementation of Variant container. It supports all basic types and some variations of STD containers.

To create a Variant from a basic type:

To get value our of Variant container you can use one of the toXXXXX() functions or value():

The difference between these two approaches is that toXXXXX() functions also try to convert internal value to requested type while value() returns a pointer to internal data.