Below are some of the settings that you can try adjusting to optimize the performance of your Liberation campaign.

Given the wide amount of differences between systems, it will take some trial and error for you to find the settings that work for your campaign. Don't be afraid to test out different settings to see how they impact your game!

Note: Prior to DCS Liberation 2.3 culling was much more aggressive, which often resulted in player flights being removed. The information below describes the behavior for 2.3+.

Enabling "Culling of distant units" in the Mission Generator settings can improve performance by removing some distant units from the game. 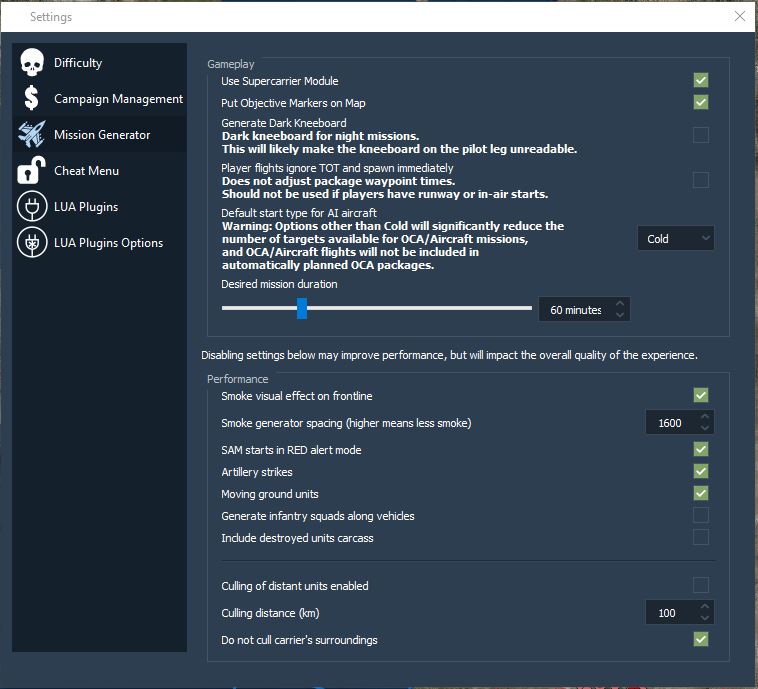 Culling exclusion zones can be displayed on the map using the "Display Culling Zones" display option in the Liberation toolbar. If set too large, culling will have little effect. If set too small, the game experience will suffer as many SAMs will likely be culled.

Air units are never culled. Restricting departure airfields for air units does little to limit unit counts, so does not help performance. Instead, the income scale modifiers can be used to limit the amount of aircraft the AI is able to purchase.

The starting budget and income multiplier is set during the initial campaign generation:

During the campaign, you can still adjust both your and the enemy's income multiplier in the settings menu:

In addition to unit culling and budget management, the mission generator page in the settings menu gives you a few more options.

Smoke visual effect on frontline: can have a big framerate impact if you are looking directly at it. If you regularly perform CAS and notice a drop in framerates while you are over the frontlines, consider turning this option off.

Generate infantry squads along vehicles: More units usually equals more resources required. Infantry does not count towards the behind-the-scenes determination of a frontline victory/loss so removing them will not affect gameplay. Note: manpads will still spawn when this option is still turned off if you have the Manpads on frontline option checked.

Using Skynet can actually help improve performance as it manages most of the SAMs in the campaign and keeps them shut off until an enemy unit is within a pre-determined firing range. In doing so, it helps by saving some processing power that would otherwise be used to keep all the SAMs operating all the time.

Disabling Tacview has resulted in framerate increases for a number of Liberation users. Most users report single digit frame increases but a few users have also experienced double digit gains. Consider turning Tacview off when running Liberation missions if you have already exhausted all other options and still need a few more frames to make your campaign playable.

Use a Dedicated Server

Users have also reported that setting up a dedicated server even on a local machine has helped improve their performance. Refer to the Dedicated Server Guide wiki page for more information on how to set a server up.