Board Bring Up Software - FujiNetWIFI/fujinet-platformio Wiki

Bringing Up the Software for FujiNet

This document will take you thru the steps needed to build, modify and deploy the FujiNet project onto the ESP32 system that is the heart of the FujiNet Hardware Device. Even if you are builing a raw devkit with an ESP32 dev board Board Bring Up Hardware or if you are using a retail FuijNet purcahsed from one of the many vendors selling them, you will have to build the same project and upload it to your device.

The production version of the #FujiNet firmware is being written in Platform.IO. If you want to help work on it, you'll need to bring up this version of the code on your hardware.

If you haven't already done so. Please install git, which is required to check out the code from the source code repository.

Which also adds a bunch of useful things.

NOTE: You need to add yourself to the dialout group and reboot

Under Windows, git can simply be installed from here: https://git-scm.com/download/win

Installing XCode from the App Store will give you 'git'. Install XCode via the command line with:

If you have brew installed you can install Visual Studio Code via brew:

Brew also contains a better version of git for MacOS:

Microsoft Visual Studio Code is used as the IDE for Platform.IO. You can get a copy of it for Windows, Linux, or Mac.

As I was testing these instructions for Linux, I found that I had to install the following packages after installing Visual Studio Code, due to only a limited Python environment being installed by default under Ubuntu based Linux distributions:

Once the Reload Now button appears, press it.

Install support for your board

On the pull-down ensure you choose version 3.4.0 You may need to quit and restart for the platforms to be loaded in the left-hand pane (Linux seems require a restart).

You should then press CTRL-` (the backtick), to open a terminal and move to where you want your repository to be. If you haven't created a space for projects, you should make one. e.g.

If you are only planning to test, you should then clone the repository with the following git command:

This command will download the project to a folder named fujinet-platformio in the current directory.

If you intend to contribute to this code, you should have an account on github.com. It is easy enough to make one, and it's free.

You should then have an SSH public key associated with your account that matches the one used by Visual Studio Code. If there isn't one yet, you can run the following program to generate one:

And then view the contents of the file it generated:

You can then check out the code with the following command:

This command will download the project to a folder named fujinet-platformio in the current directory.

If you are not comfortable using SSH keys you can also use Personal Access Tokens to checkout and push code using HTTPS (not ssh).

Create a platformio.ini file from the sample before opening the project

Before opening the project, copy the file in the project folder you just cloned (fujinet-platformio) named platformio-sample.ini to platformio.ini. This file both tells the PlatformIO extension in Visual Studio Code that this is a PlatformIO project, and is the place you'll adjust settings for your particular hardware configuration (see below). For example:

Now open the project in Visual Studio Code by using the Open Folder option in the File menu and navigating to open the fujinet-platformio folder you cloned.

You should now see "FUJINET-PLATFORMIO" in the Explorer menu bar (click on the top-left icon that looks like a couple of stacked pages) with various folders including data, lib, and src.

Modify platformio.ini for your hardware configuration

In the above example, I've commented out the LYNX platform and the devkitc. Ensure only one platform is ever enabled at build time. Simply uncomment the platform, bus and board you want to build and ensure any others are commented out.

In the [env] section, you need to set the communications port your board is connected to. This port is used for both loading the FujiNet firmware on the board and viewing its debugging output. The speeds defined in the sample configuration file should work in most configurations, but you'll very likely need to change the port number. upload_port and monitor_port are usually set to the same value, and upload_speed and monitor_speed are usually set to the same value.

You can see what your local USB device is named by clicking on the Devices tab, all connected USB serial devices should be listed. If not ensure your USB cable is plugged in and then click the Refresh button. If you'd like to change build settings, you should change them in the [env:] section. The main setting that is of interest here is the build_flags which makes certain changes when building the firmware code. Build flags of interest are:

Note that a semicolon before a value makes it disabled or use the default value.

This example has JTAG disabled but Bluetooth enabled and debug monitor speed set to 921,600 baud:

The build_board variable chosen above selects a more specific [env] targeting specific hardware. There are additional build_flags in these sections that relate specifically to the platform selected. You may (un)comment build_flags in this section as needed BUT do NOT uncomment the PINMAP_XXXX line as this is needed to define which pins are used by the ESP32 (these are defined in include/pinmap.h).

Select the Platform.IO tab (it has an "alien head" icon).

Expand the project environment for the build_board you have chosen in platformio.ini. This will on-demand load required libraries/frameworks (this can take some time, the first time you do this). 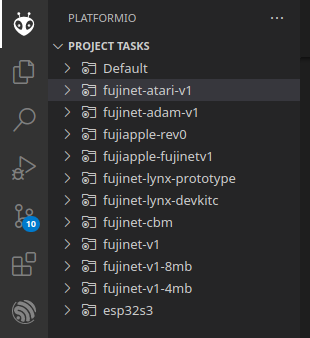 If you are comfortable with a terminal, there are some UNIX commands that can make these changes for you. They are listed below for you to use.

This command will open the ifdef at the top of the dirent.h file:

This command will close the ifdef in the dirent.h file:

You can verify the changes have been made to the file:

Of course you can always just open up the file ~/.platformio/packages/framework-espidf/components/newlib/platform_include/sys/dirent.h in your favorite text editor and make the appropriate changes.

Return to the Platform.IO tab, and choose Build. 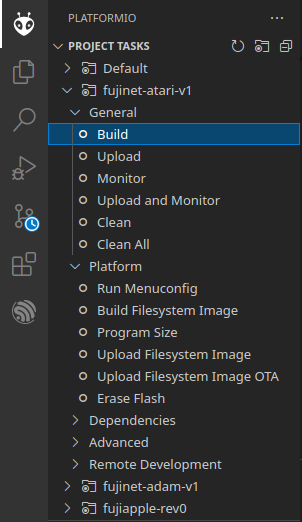 The TERMINAL section of Visual Studio Code will show the progress of the build. You know it's done right when you get the output:

If you see output that indicates error conditions you won't have a firmware.bin file to upload. Make the corrections to ensure that the build completes and you have a firmware.bin create. This will be used in the next steps to flash the fujinet with the new functionality.

Upload the firmware to your ESP32 board

There are two blocks of data to upload to your board: the file system image and the firmware. The file system image consists of files that the firmware makes use of while operating (e.g. printer emulation fonts). These are stored in the project's data directory and don't change very often. The firmware is the actual code the board runs, and this changes with every new build.

Select the Upload File System Image task in the Platform.IO tab to upload the contents of the data directory.

Select the Upload task in the Platform.IO tab to upload the firmware to your board. This will also cause the firmware to be re-compiled if any changes have been made to any of the source code files.

If everything works, the FujiNet board should automatically reboot and start running the newly uploaded firmware image. You can use the Monitor option in the Platform.IO menu to view any debug logs the FujiNet generates as it operates.

What is going where? Copyright 2022 Contributors to the FujiNetWIFI project.

Join us on Discord: https://discord.gg/7MfFTvD