Ubiquity Governance (UBQ) represents the voting powers of community members to help shape the DAO's future. UBQ had an initial supply of zero and is generated as users interact with the DAO's products.

UBQ is a perpetually inflationary ERC20 token that may be minted by all products within the Ubiquity ecosystem with two main goals:

The UBQ token has no predefined mint schedule but is released when circumstances require it (some cases will be shown in this document for uAD) To avoid hyperinflation of the UBQ token, each product in the Ubiquity system that is allowed to mint governance tokens will be subject to a product-wide penalty depending on the total amount of UBQ tokens minted by the protocol. This penalty is defined by the following curve: 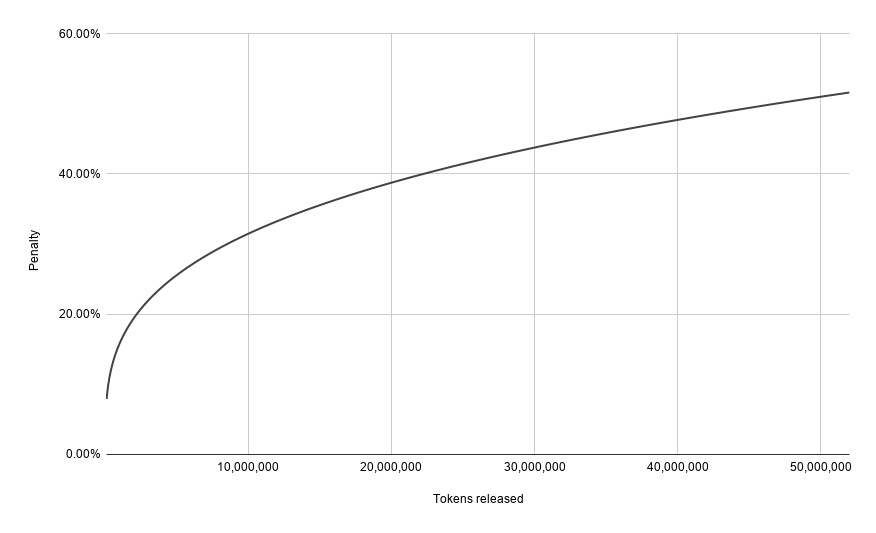 At the early stages of a product, newly minted governance tokens will be distributed with no penalty; as the amount released surpasses 47MM tokens, the penalty will be upwards of 50%. The above curve becomes a product-wide UBQ penalty based on the number of tokens minted by this specific product.

All of Ubiquity's products that distribute rewards in UBQ also allocate part of the proceeds generated by the product in a UBQ fund.

In the case of the uAD protocol, this will be:

All funds deposited in the UBQ fund will be used to buyback & LP on our uAD-UBQ incentivized market on SushiSwap. Buyback & LP is a similar mechanic to buyback & burn, with the core difference being that when the protocol buys back UBQ tokens from the market, the tokens are not being burned, but rather provided as liquidity in our uAD-UBQ incentivized market. The LP tokens are then burned. The net effect on the price is similar to that of a buyback and burn with the core difference that, in this case, the liquidity of the token is also enhanced.