The go-subql-substrate-dictionary was written in Golang, which is known for it's built-in concurrency. The dictionary consists of multiple components which will be described in the following rows. 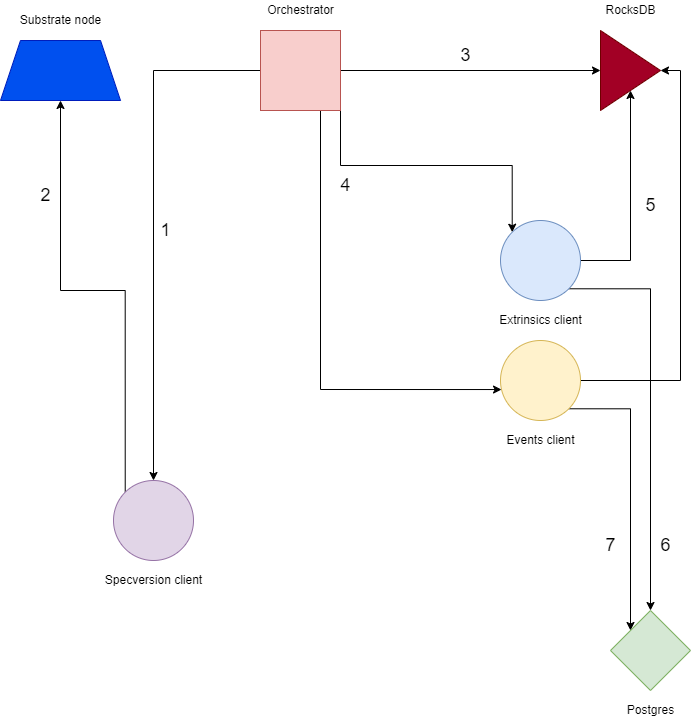 The heart of the dictionary indexer is the Orchestrator, which is the component that acts as the glue between all the other components. It's role is to start the other components, initiate their state, either by starting from the beginning or trying to recover the state from a previous run if an error stopped the program and feed the clients batches of blocks in order to be processed.

These are the clients that will index the actual data of interest. They will query the raw data from Rocksdb, decode it, parse it and insert the relevant parsed data into Postgres.

Both clients will have a Postgres client waiting for data on another channel. That database client will have an insertion or update buffer (depending on the case) which will accumulate the processed data by the extrinsic/event client. When a batch is finished, each client will notify it's database client that it has to insert or update using the data accumulated in each buffer. Even though the batch size is known (batch size represents the number of blocks processed before an insertion), the buffer size is not as there might be much more events/extrinsics inside a block.

After finishing all the current known blocks, the Orchestrator will try to synchronize the Rocksdb instance it is using with the main one and ask the Spec version client to update the spec versions and the Extrinsic and Event clients to continue the processing up to the new last synced block number.