Module connections over the project

Module connections give the idea of the project design & structure: 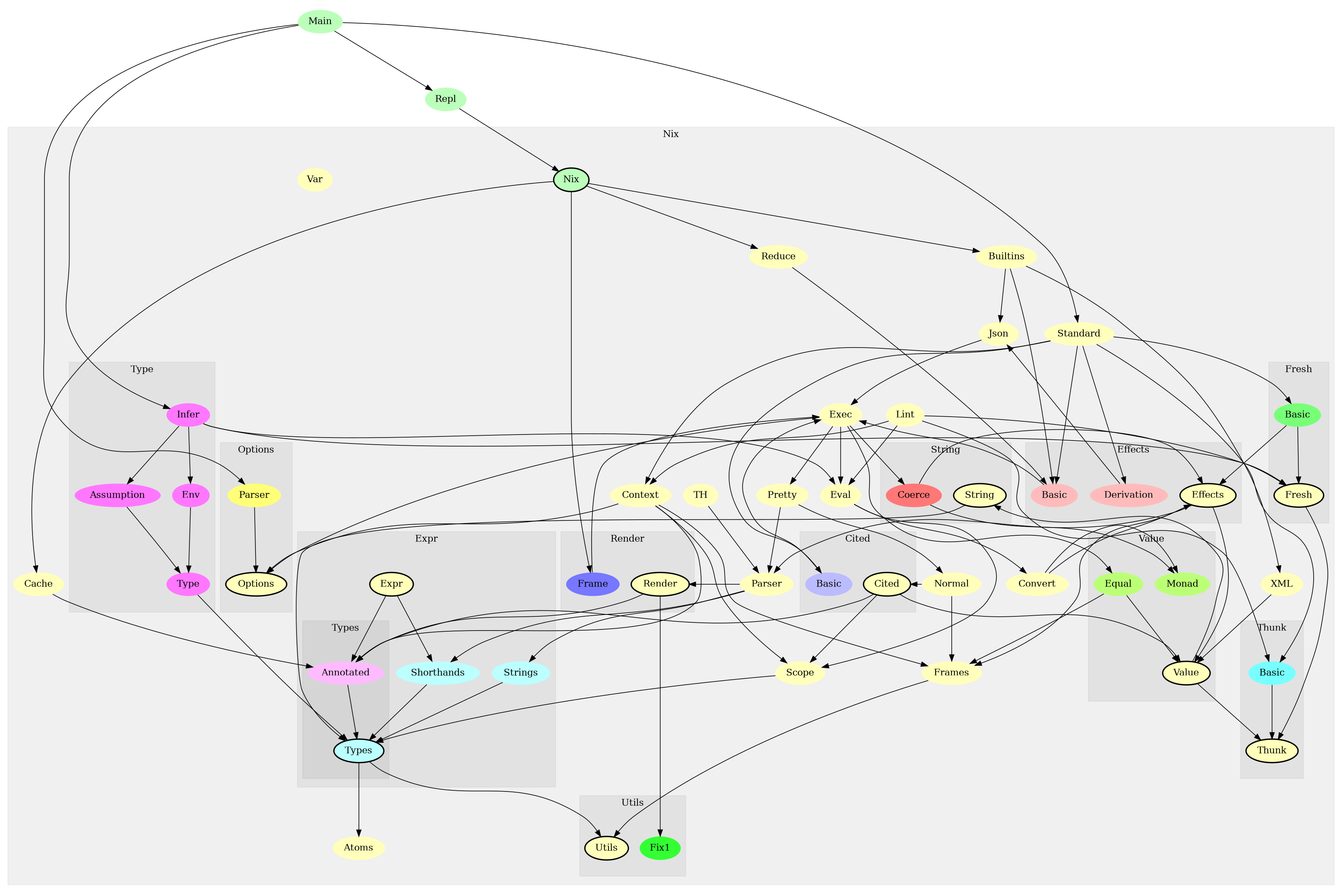 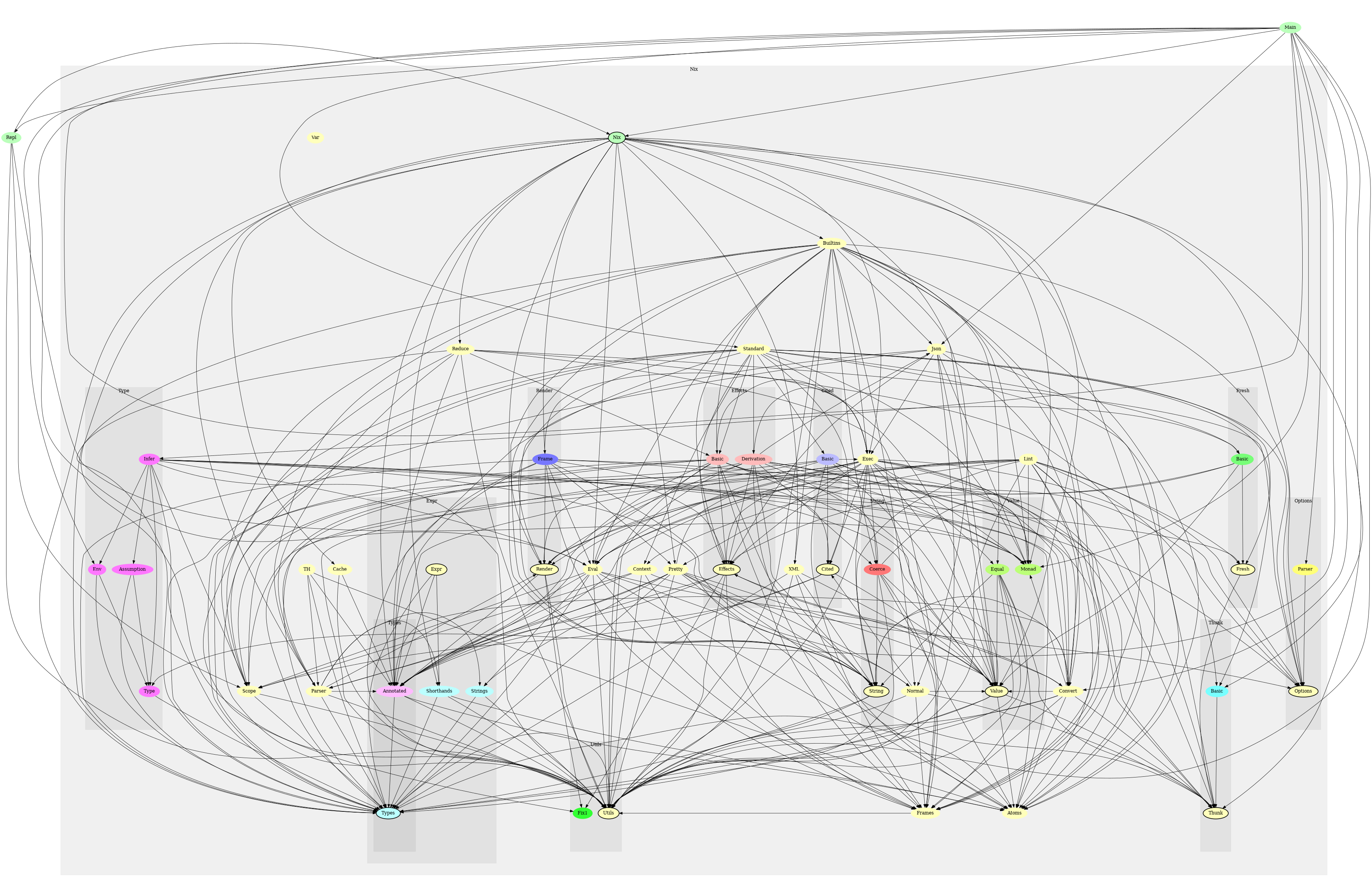 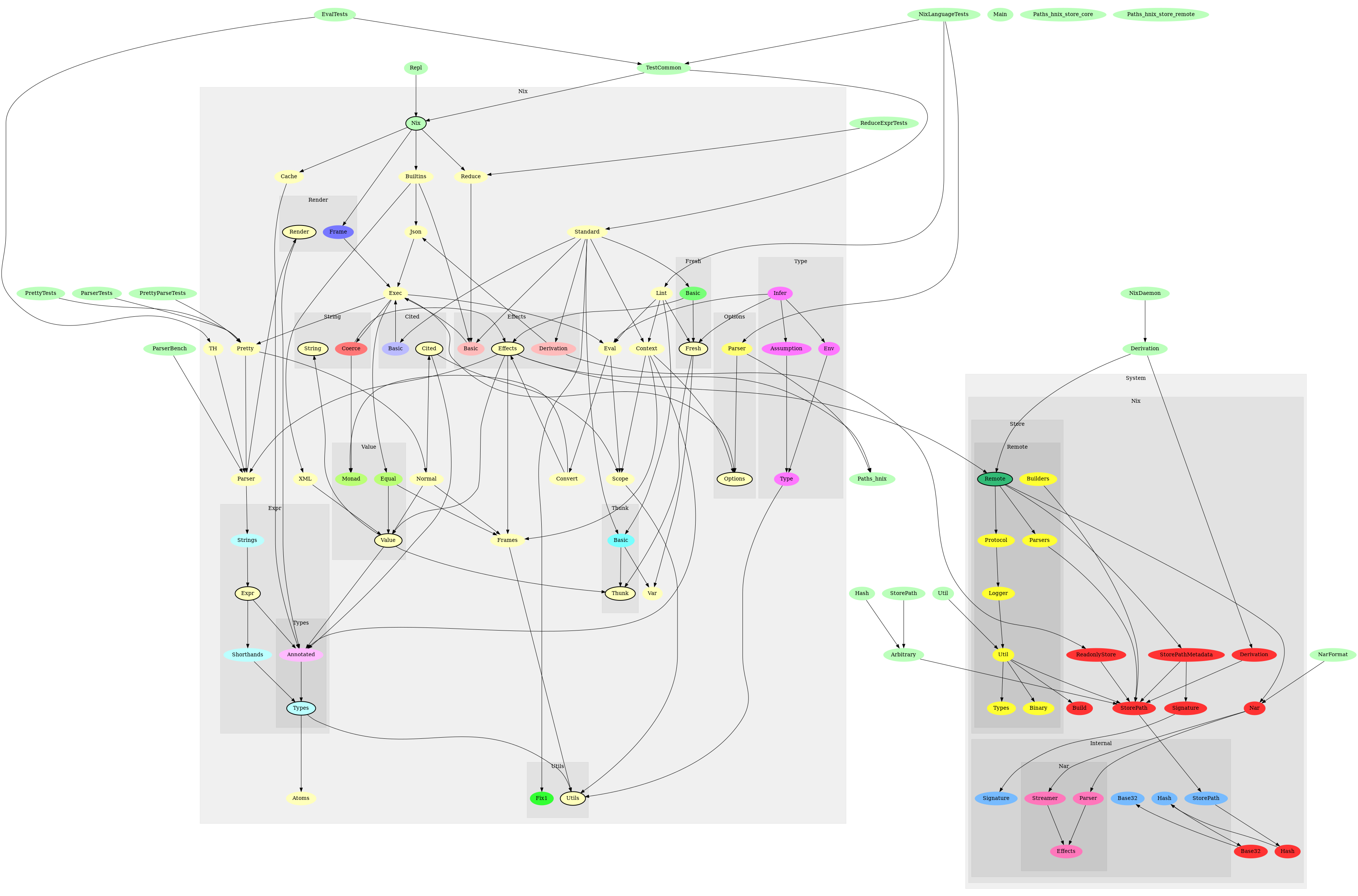 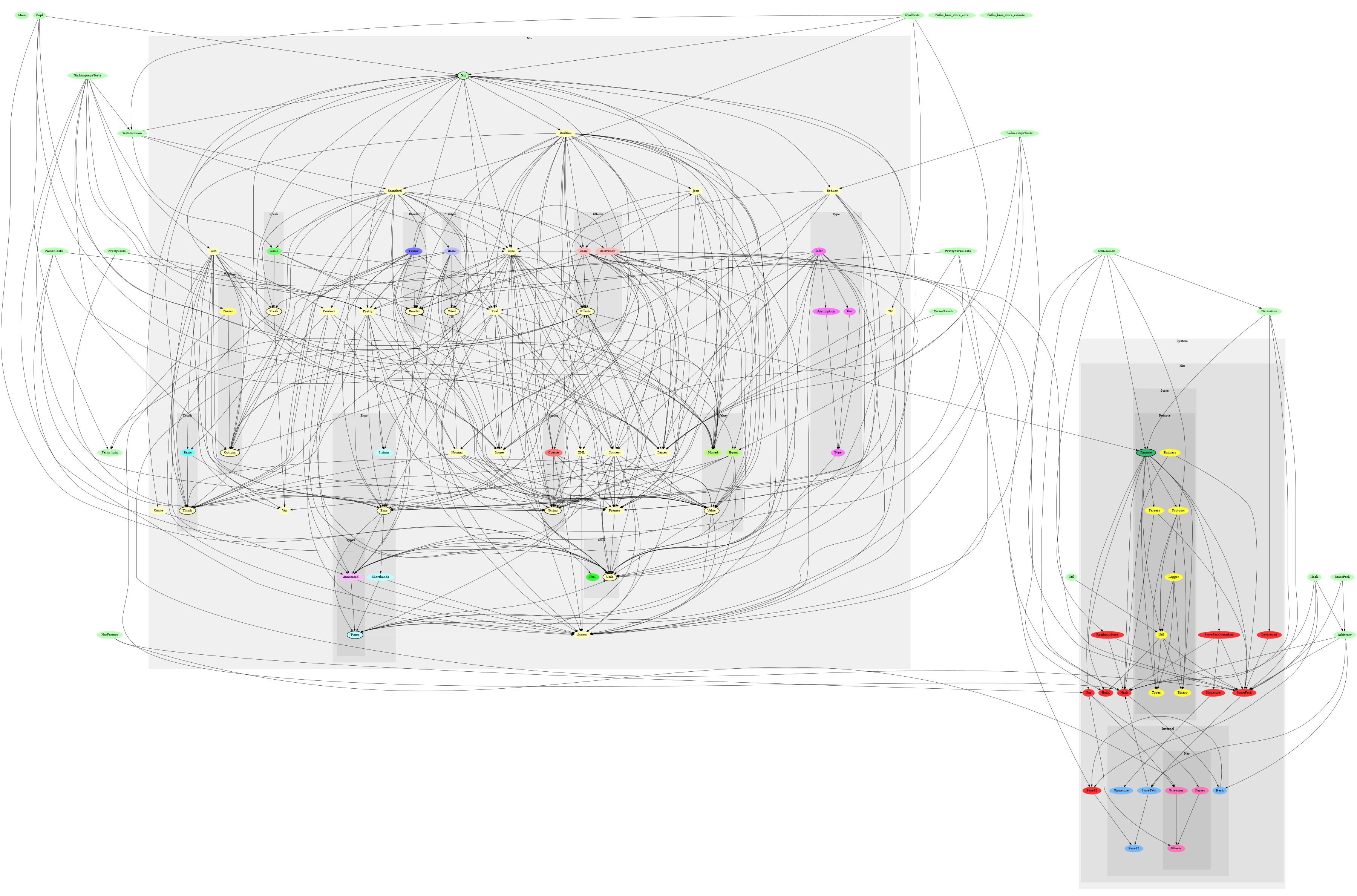 Welcome to the HNix code! You may notice some strange things as you venture into this realm, so this document is meant to prepare you, dear reader, for the secrets of the labyrinth as we've designed them.

The first thing to note is that HNix was primarily designed so that Haskell authors could use it to craft custom tooling around the Nix ecosystem. Thus, it was never fully intended for just the end user. As a result, we use a great deal of abstraction so that these enterprising Haskell authors may add new behavior at various points: within the type hierarchy, the value representation, and the evaluator.

To this end, you'll see a lot of type variables floating around, almost everywhere. These provide many of the "injection points" mentioned above. There is a strict convention followed for the naming of these variables, the lexicon for which is stated here.

Notes on basic Nix types and the recursion schemes implementation

HNix uses recursion schemes in the core part of the project to express and administer the recursive nature of the Nix language in the most effective implementation.

Recursion schemes DSL engine is a hassle to implement, but after it is done, the further handling is quite easy.

*F type is F/f (Functor) for its particular F-algebra.

Literally, the full description of what is F-algebra and its parts, translated into Haskell: 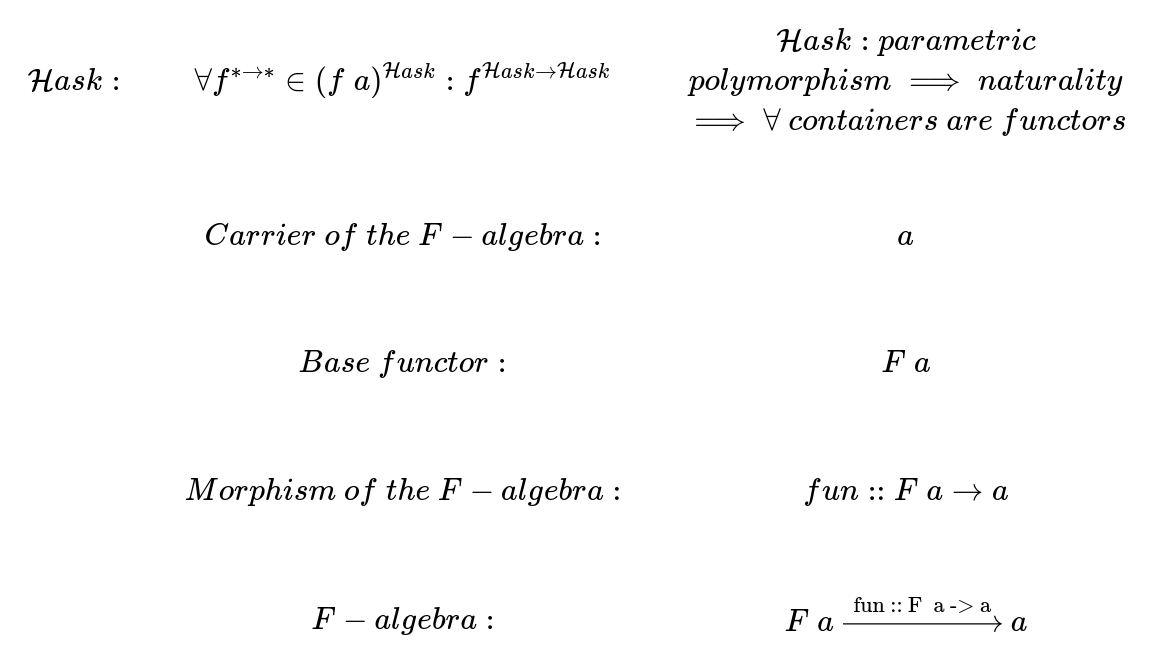 The recursion-schemes perspective is to view recursive types as fixed points of functors.

So the core of the Nix DSL type system:

NValueF and NValue' are used only to implement the NValue, and all other project works with NValue exclusively. NValue can be met everywhere in execution code: primOps, builtins, effect, language conversion.

So it is real-deal elegant F-algebra. It implements Nix language in the most direct way from Haskell, Nix becomes a DSL of Haskell from now on. With Haskell type-checking system. Moreover, F-algebra is very convenient implementation - it is an endlessly conveniently transformable thing through just several basic operations, as would be seen further. The transformable thing that is fully recursive in its nature, but from now on that does not bother us anymore, since it is under control.

There are NValue* t f m and such, where:

t is the type of thunks. It turns out that HNix doesn't actually need to know how thunks are represented, at all. It only needs to know that the interface can be honored: pending action that yield values may be turned into thunks, and thunks can later be forced into values.

f is the type of a comonadic and applicative functor that gets injected at every level of a value's recursive structure. In the standard evaluation scheme, this is used to provide "provenance" information to track which expression context a value originated from (e.g., this 10 came from that expression "5 + 5" over in this file, here).

m is the "monad of evaluation", which must support at least the features required by the evaluator. The fact that the user can evaluate in his own base monad makes it possible to create custom builtins that make use of arbitrary effects.

v is the type of values, which is almost always going to be NValue t f m, though it could be NValueNF t f m, the type of normal form values. Very few points in the code are generic over both.

Morphim that is transformations between 2 F-algebras called recursion scheme. So recursion schemes are just simply different operations on initial F-algebra. Why it is said as just any operations? Because any f a (of kind >1) - is a functor, so any F a b c d.. to infinite complexity - is also a functor. And the only remained case is kind 1 type. And surprise - it is isomorphic to the Id a, and that is a functor, so from 1-type F-algebra also can be constructed: Id a -> a, and as regular F-algebra they are the first-class citizen for recursion schemes, there is no longer any difference for us.

The possible operations: Cheat-sheet. Put in the other words: Table.

For example in parsers - are so called "unfixed" types for/from recursion schemes (common recursive operations), these types are a generalization of the recursive data types into open (non-explicitly recursive, but allowed through polymorphism) form. So Fixed data type versions - are (equivalent to/are) regular data types to work with (aka list), and the *F - are their generalizations (one layer open for possible recursion (through self-application) - but without explicit recursion). *F is a type that both can become recursive structure by applying Fix to it, and as a single layer of the structure - internal value/data can be extracted from it in the initial form. For example - from the list cell the value extracts in the initial form, and it is impossible to extract initial data from the list (recursive structure) without referring to list cells (without referring to building blocks - the recursive structure can transform only into the recursive structure - which never terminates into receiving initial data), so addressing the cell in a list - is a unFix of a list to the outermost cell, and from the cell, the data can be extracted.

Fixed types - are the actual presentation of the data types.

The project currently uses relude, which is a straightforward helper prelude that currently helps to reduce the default Haskell technical debts in the code.

The project enables OverloadedStrings by default.

The project enables ApplicativeDo by default, so maybe think about wrapping the (=<<) & (<=<) into do block, if there may some optimization be possible.

Some of the history is at the end of The Haskell Cast: Episode 13 - John Wiegley on Categories and Compilers.