We have been working for a while on Domino Visual Editor, Form Builder, and NSFConverterPortalProject for a while, but there was some confusion in the last Moonshine meeting about how all these pieces will work together.

There are two main use cases we want to support:

For this case, we want to take an existing Domino database and quickly make the data available through a Royale application. Once we have the basic application done, the user can make further applications.

For this case, we want to quickly mockup and create a new Domino application with a Royale interface. The database and application can then be customized.

Here is a diagram of how the different components work together. The components will be explained in more detail below. 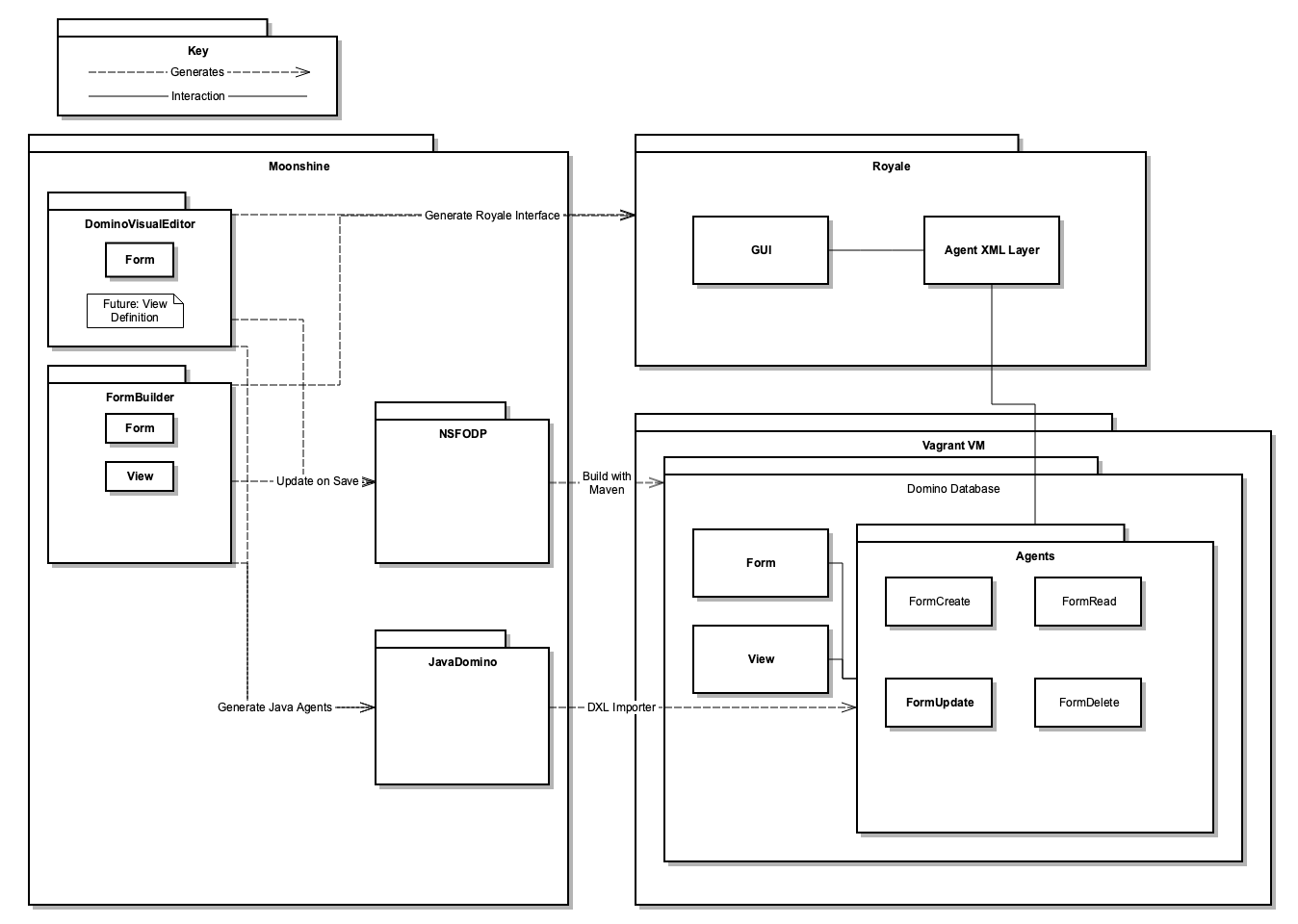 As the first step of the Converting an Existing Database use case, we need to convert an existing Domino database into a Domino Visual Editor project. We do this with NSFConverterPortalProject.

NSFConverter is designed to run inside a Vagrant instance. The user can access the web interface to convert a database. The expected inputs are:

The user is expected to create a local copy of their database to test. The recommended settings are:

NSFConverter will actually generate XML format that does not exactly match the Monshine format. When opening in Moonshine, these files will be automatically converted to the Moonshine format.

We also intend to add functionality to convert the database in Moonshine using Vagrant-REST-Interface.

The Domino Visual Editor project gives the user a visual interface to design and configure a Domino form. This is intended as an alternative to using HCL Domino, while still having similar functionality.

The form configuration is stored in "intermediate XML", which is intended to be a language-independent configuration that defines the structure and layout of the form.

In the future, we will add support for more Domino Design elements:

Form Builder is tool to generate Forms and Views based on a simplified list of properties and field definitions. This offers minimal control over the layout, so the generated applications will use generic templates.

Both Domino Visual Editor and Form Builder are based on NSFODP, which is create and maintain a Domino database based on a Maven project. The database can be generated with Project > Build with Apache Maven

The database can be generated from:

We want to be able to generate and deploy the database to three locations:

By default, the generated database will have a very permissive ACL (security) configuration to make it easy to use during initial development. The developer will need to update the ACL once this is used for production data (we don't have immediate plans to implement this in Moonshine).

The Java Agents will be based on the Moonshine-Domino-CRUD API. These agents will provide access read and update the database. The agents implement a general JSON interface that could be used by other applications as desired.

The agent project will be generated from a template provided in the Moonshine-Domino-CRUD project. The project may also include documentation and deployment scripts.

The agents should be customizable:

The agents can only run from a Domino database on a web server, so they will need to be deployed. The default would be to deploy them to the Generated Database, but they could also deployed to a separate database (to allow a more restrictive ACL configuration). Some options:

The Royale Application should provide a minimal interface to access and update the database with CRUD applications.

We would like to support generating the Royale Application as a standalone project. In this case, the application would use an in-memory data model for the CRUD operations. This will allow the user to test how the application will work without having to build the database agent agents each time.

This application should be a good starting point that developers can customize for their individual requirements. Some example customizations:

The application can be run in one of the following ways: