AND, The outputs are in docker volume named elmoutput. NOTE: you can name whatever volume you'd like.

Open terminal, and type the following:

STEP 2. Open Docker Desktop, if installed, and create a Volume for a work directory to save your results.

Suppose that had already run ELM, and saved all outputs in a docker Volume on disk, named elmoutput, like:

NOW, click the most LEFT/UPPERVolumes to back to Volumes panel, and click its UPPER/RIGHT button Create+ to create a new volume, named as 'elmwork', which will be used to store your analysis results.

AND, you then should see the following:

In Terminal, type the following command:

if successful, the following message will show in your terminal window,

**AS hinted, do one of 3 methods, to lanuch jupyter notebook, in YOUR internet browser. The following will be showing, maybe slightly different in yours. AND thereforward you're going to do visiualization in this browser windows.

(1) click-open the script file, run_plot_KG64_ELM_output.ipynb, it shall be showing: 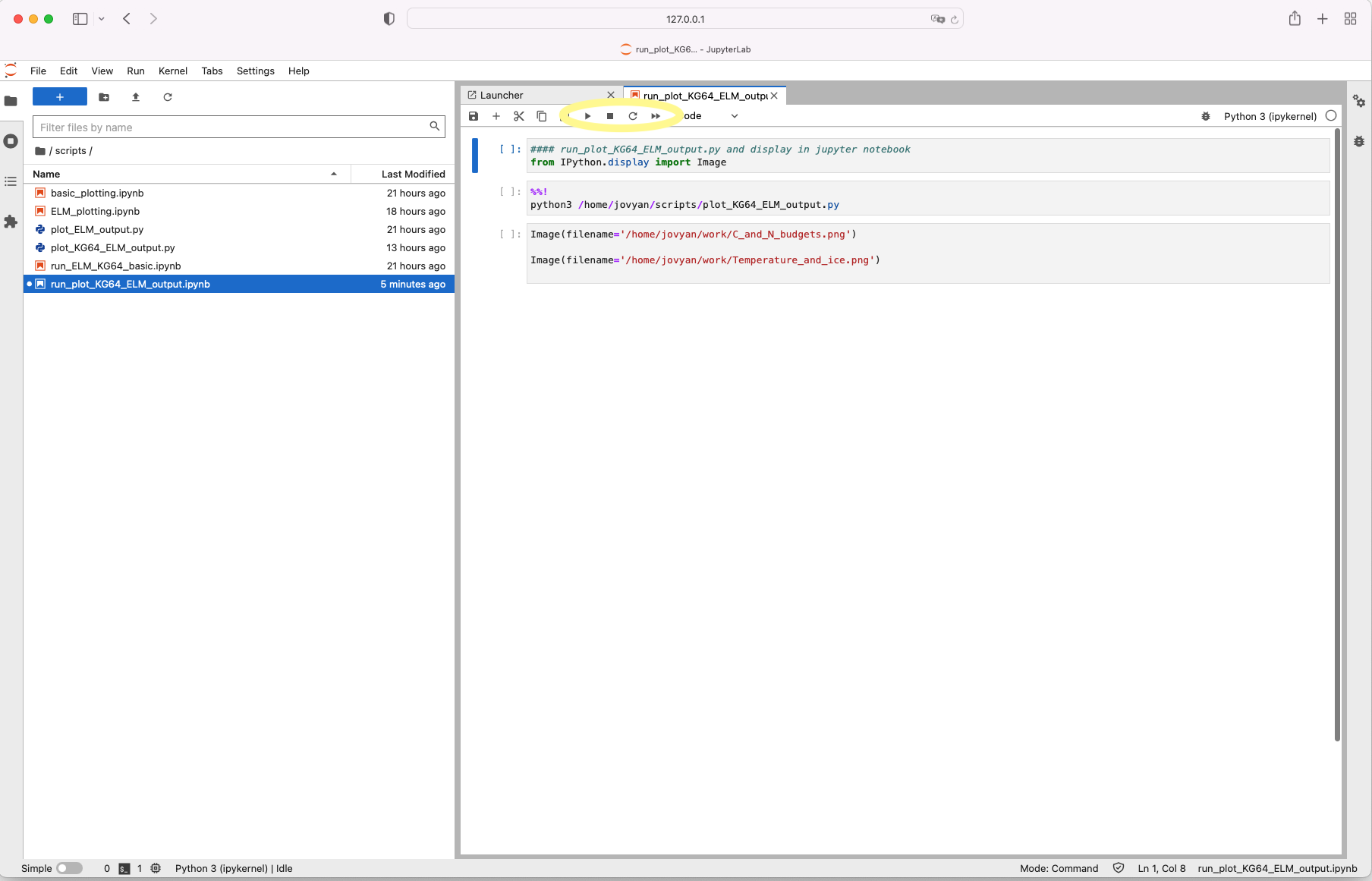 NOTE: in the above screen-shot, there are 4 click-buttons highlighted in a yellow circle. Those 4 buttons are for running jupyter notebook scripts - if your mouse pointer hover on each one, it will show what would happen when click.

(2) For an example, if click that fast-forward-like button, it will run script in all-steps (blocks of scripts indiced in [], called cells in ipynb) at once. 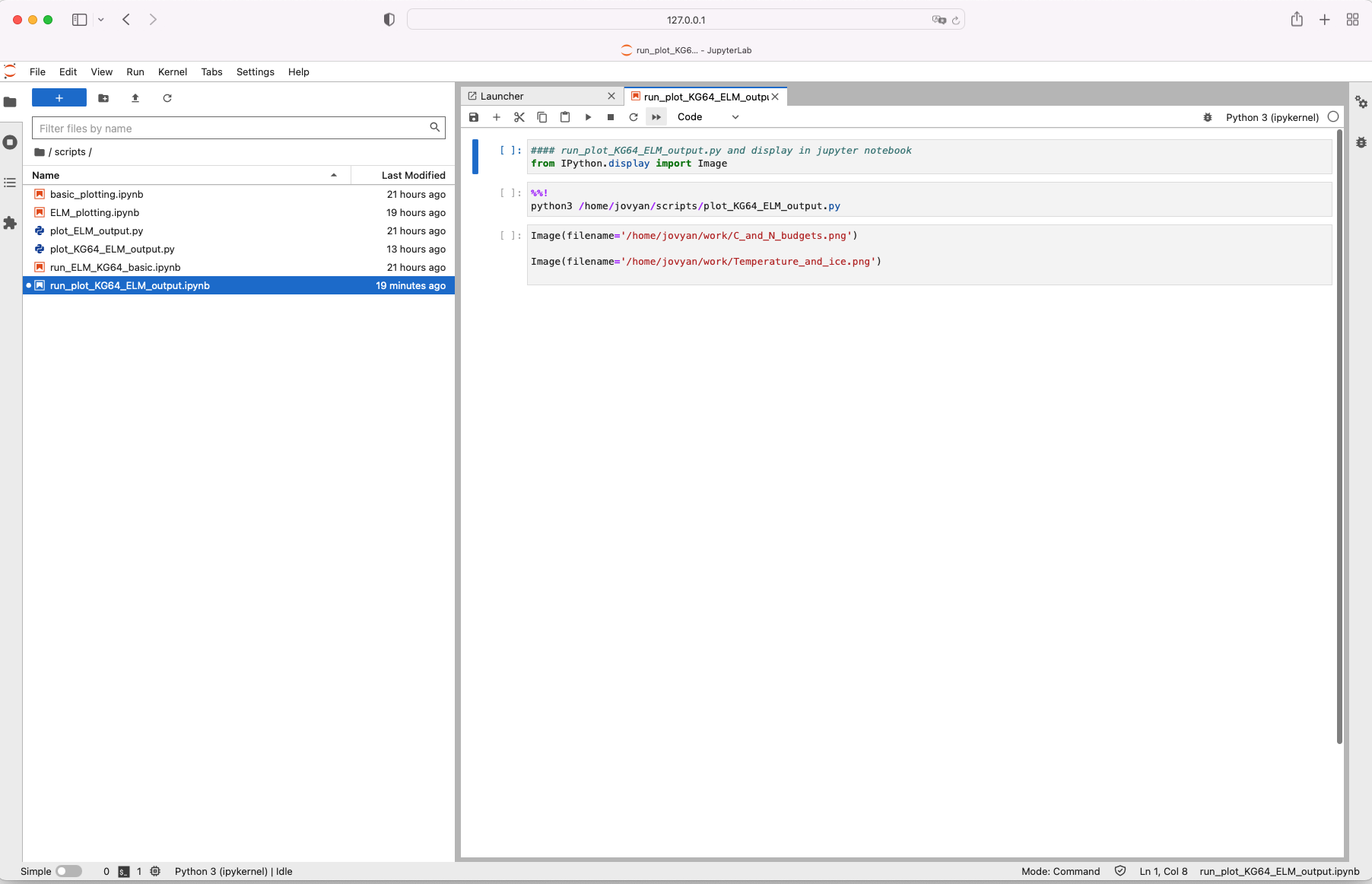 And after successfully running script, it will show like following in this example. 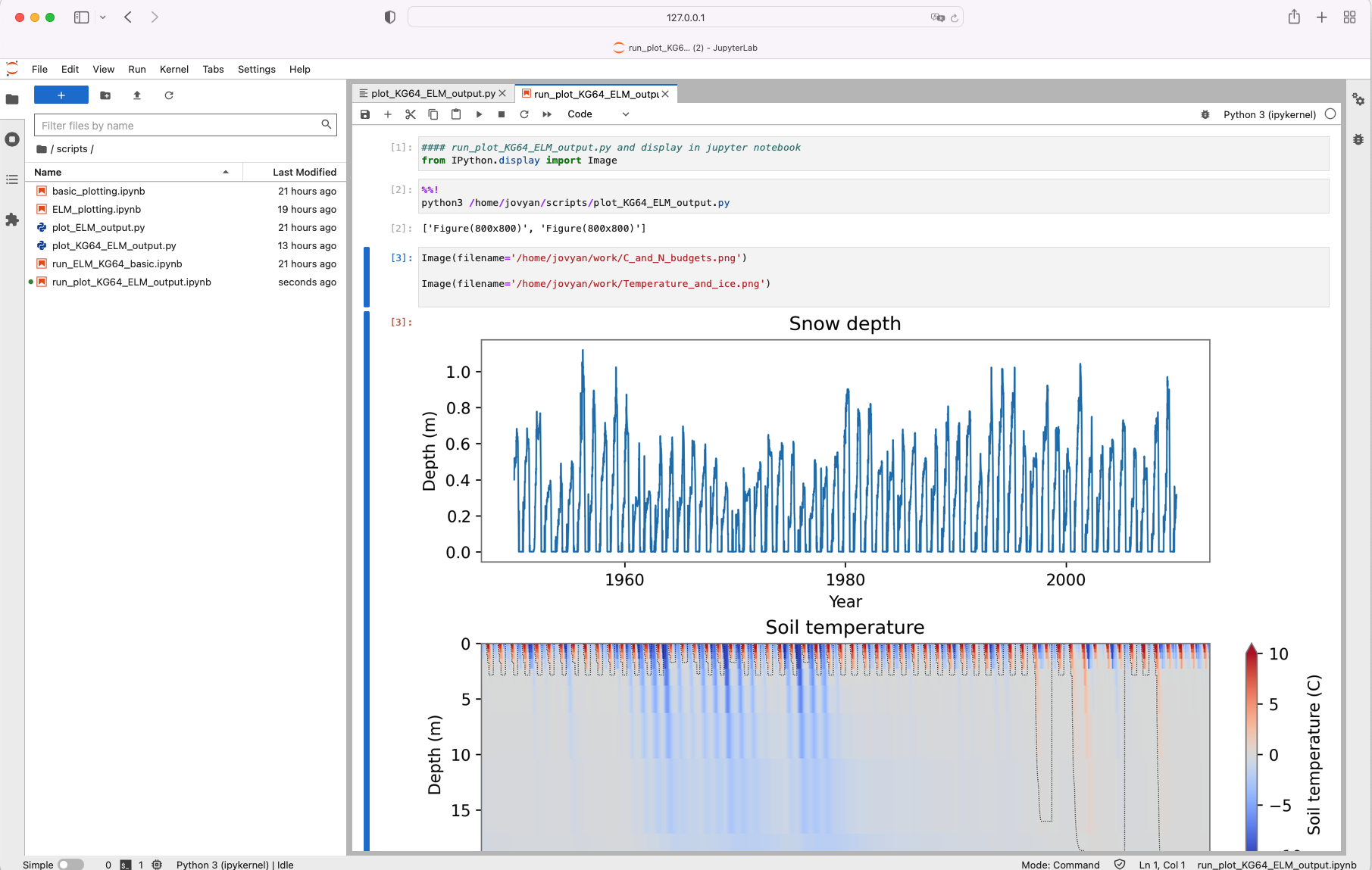 NOTE: You can check if there are 2 images of Figures generated from this script, in Docker Desktop App's VolELM_work directory, AND save them to your local file system if want to.

(1) click-open the script file, plot_ELM_variable.ipynb, it shall be showing: 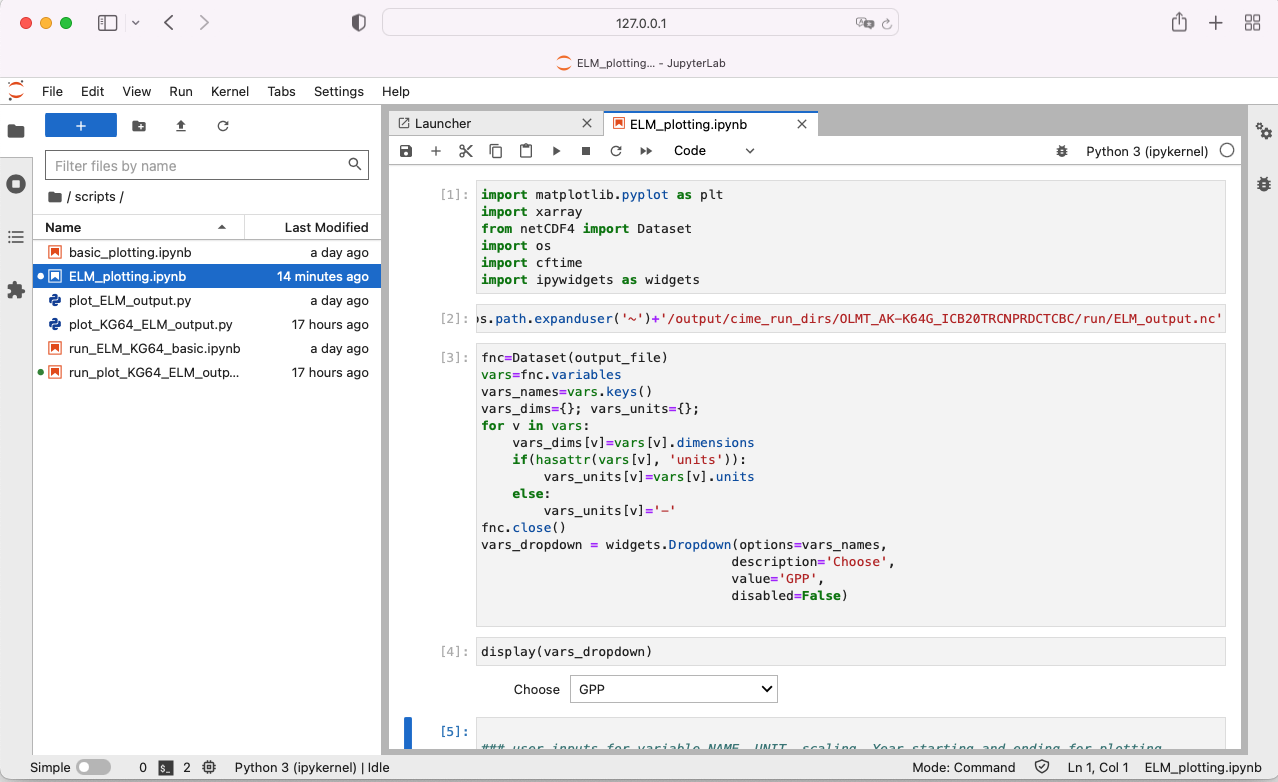 (2) For an example, if click that fast-forward-like button, it will run script in all-steps at once, and will plot **GPP** by default. 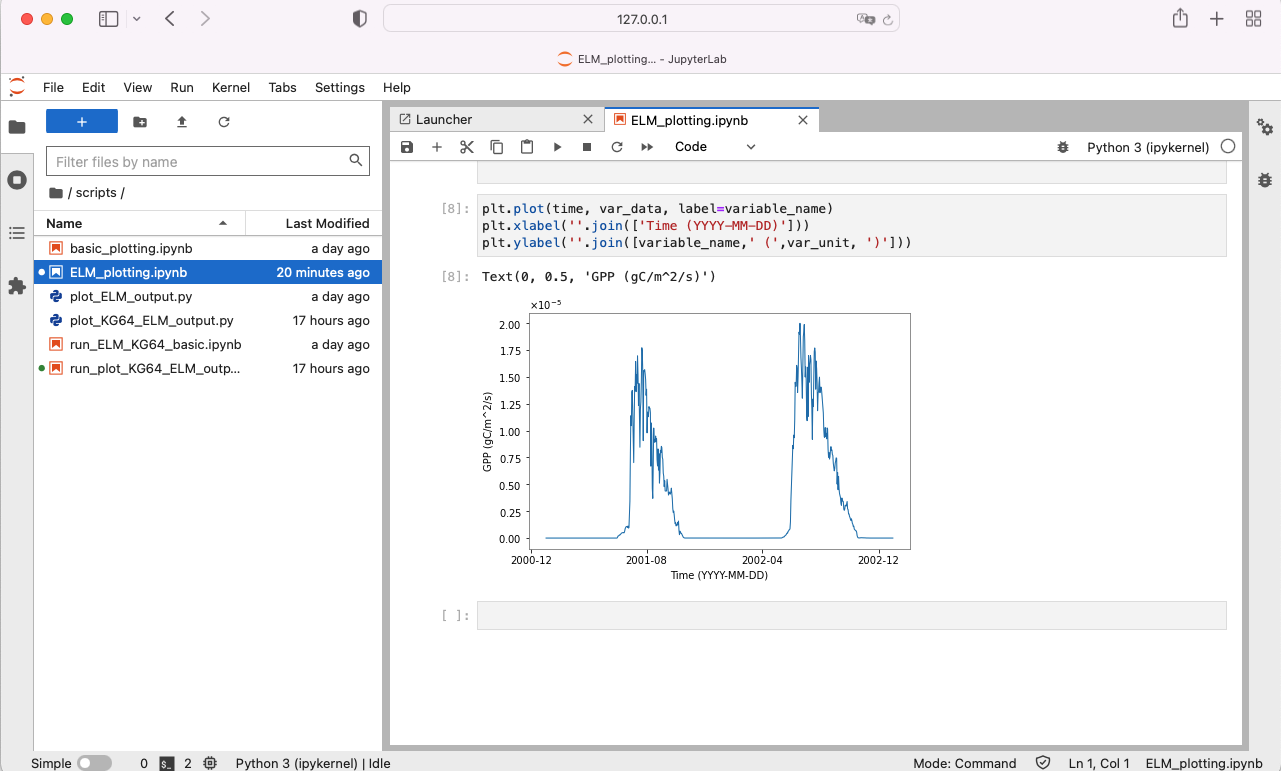 (3) Interactively choose a variable from a dropdown box.

Scrolling up to move your mouse pointer to cell [4], like 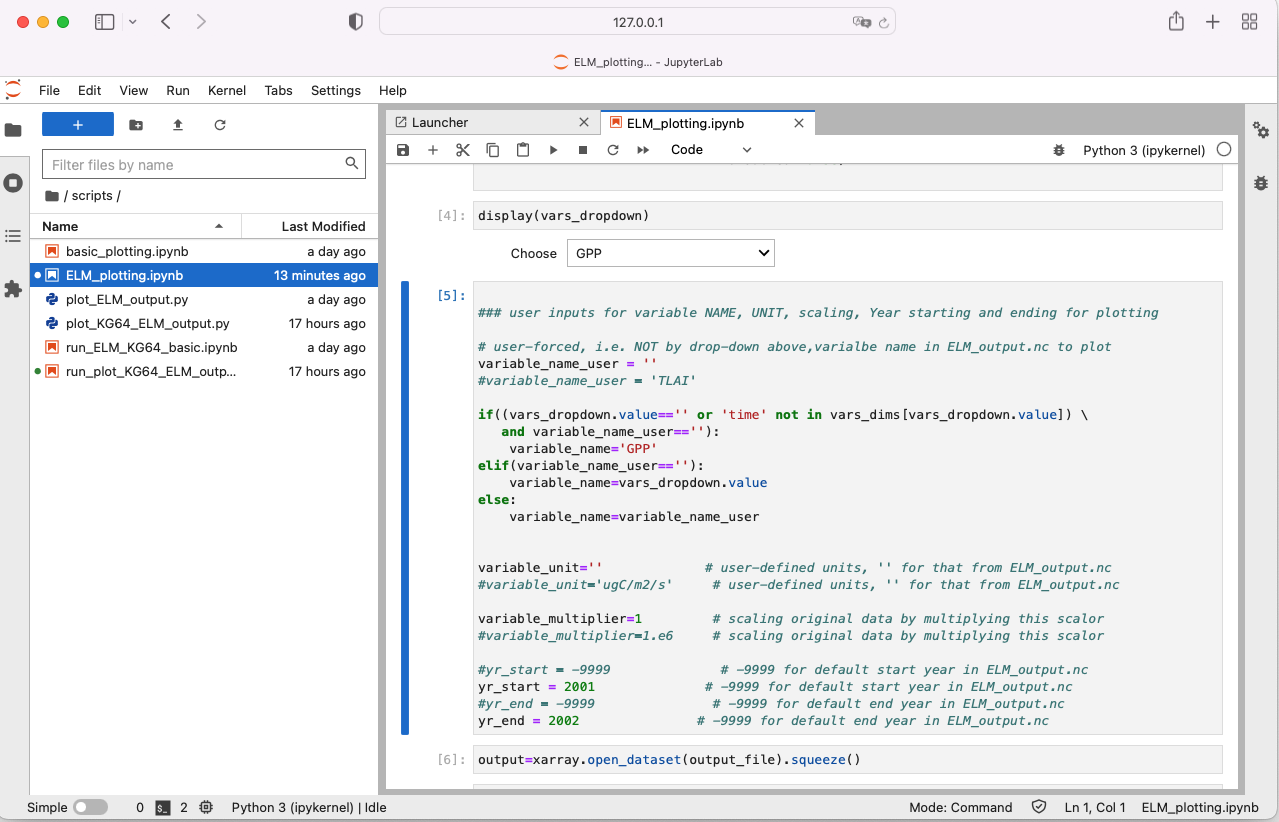 By clicking the dropdown arrow, it will show whole list of variables from ELM outputs, and Choose one, such as TSOI, the soil layered temperature, 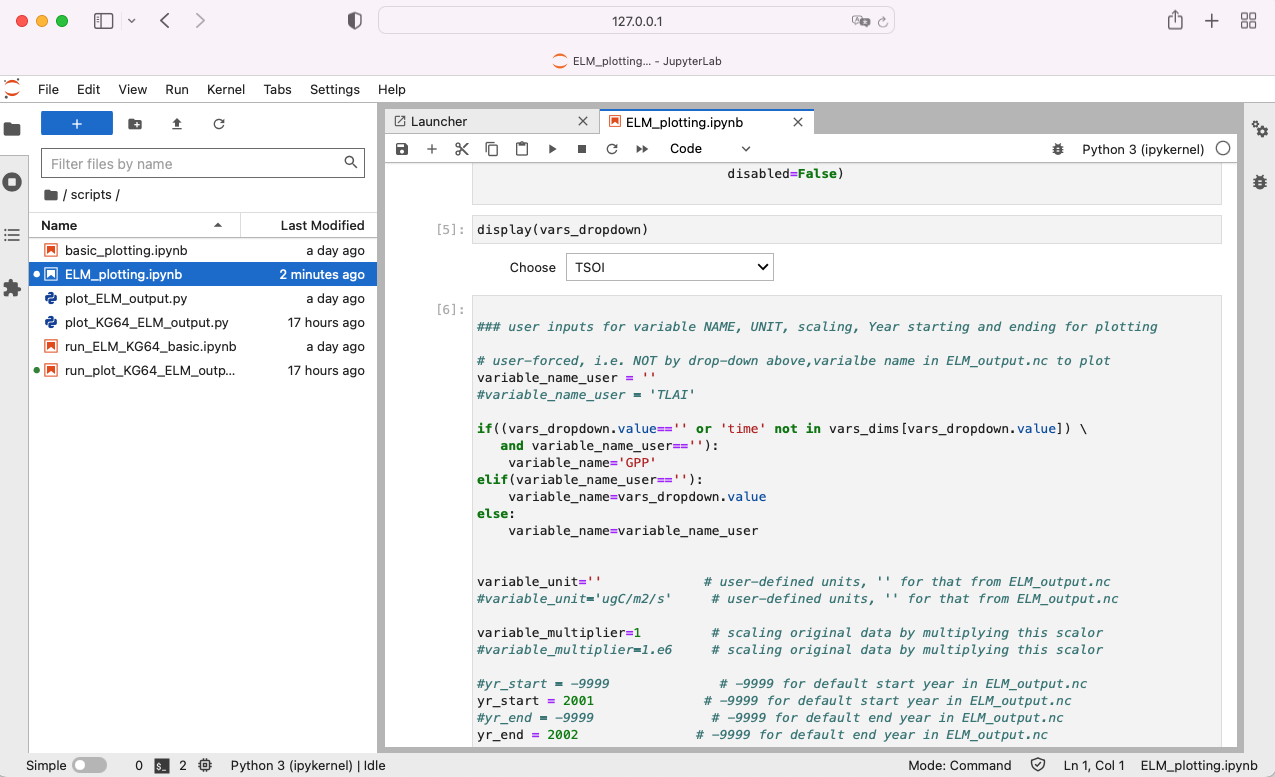 AND, then Clicking one-step advance button,

in the upper bar, until end of script, it will plot like following: 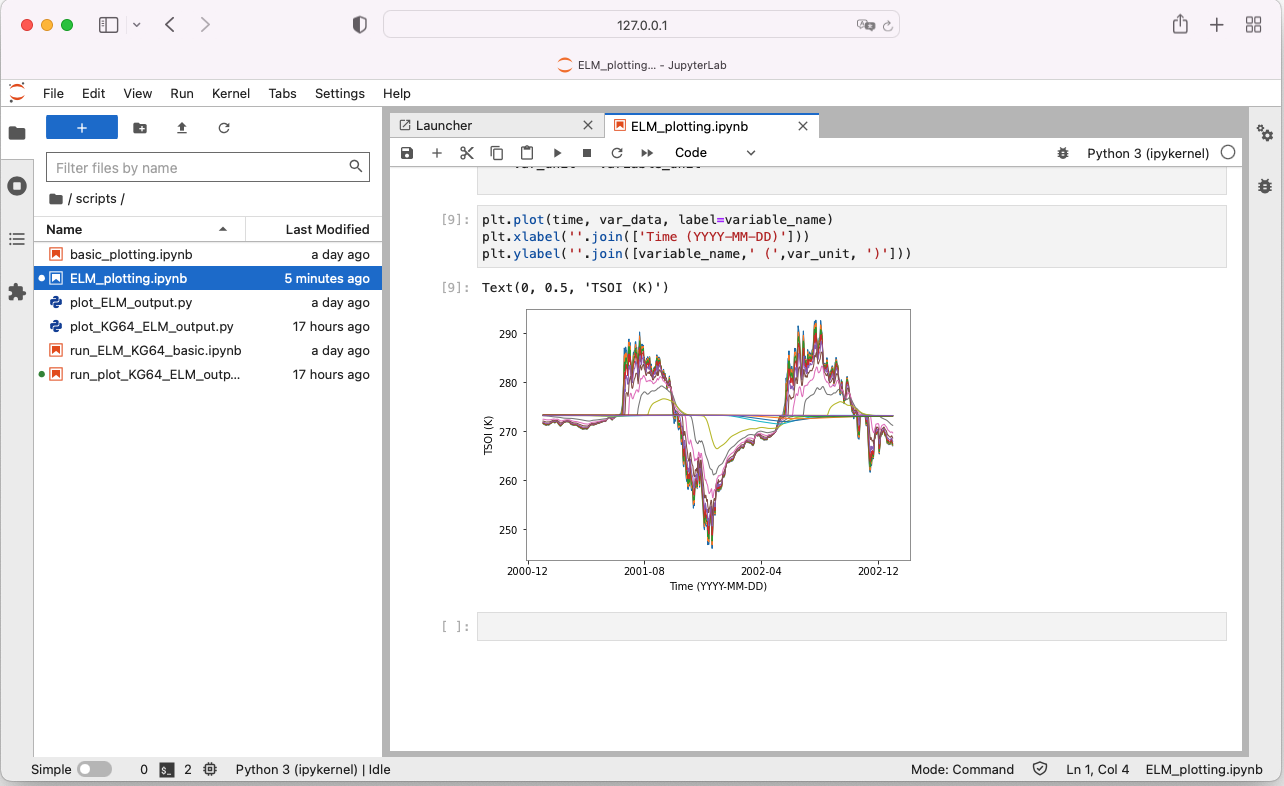