The document here is meant to help you develop or test changes to EdgeTX on your PC, not to build flight/radio safe version of binaries.

Setting up the build environment for EdgeTX

You can setup Ubuntu 20.04 on bare-metal, inside a virtual machine environment, or using WSL2 under Windows 10. For WSL2 installation, please see a dedicated page about it: Setting up Ubuntu 20.04 in a Windows Subsystem for Linux.

If you are interested to see what the script does or which functions it calls, you can open it in a text editor and have look at it - it's pretty self-explanatory (gedit for example in Ubuntu is a text editor with syntax highlighting). You can alternatively start the script with --pause argument to stop the script execution after each step to better inspect the output. To achieve this, issue ./setup_buildenv_ubuntu20.04.sh --pause as the last command in the above list instead.

It's best to reboot the PC before continuing to next steps. This concludes the build setup preparations.

Building EdgeTX firmware for the radio

For tidy files and folder hierarchy, it's best to create a dedicated subfolder in the current user home for EdgeTX, as a container for various EdgeTX flavors and builds. In the terminal window, issue the following commands, one at a time:

We will next fetch the EdgeTX source files from the GitHub main development branch into local subfolder /edgetx/edgetx_main in current user home, prepare the environment and build output directory. Issue, in the same terminal window as above, the following commands, one at a time:

To build EdgeTX, we need to minimally specify the radio target, but can further select or de-select a number of build-time options. The following command will create a text-file list of all options for you to look at and saves it in current user home directory:

You can use, e.g. gedit under Ubuntu to view the file.

As an example, we will build next for RadioMaster TX16S (PCB=X10, PCBREV=TX16S), mode 2 default stick (DEFAULT_MODE=2), global variables enabled (GVARS=YES), servo output unit as microseconds (PPM_UNIT=US), opted to save memory and build without helicopter mixes (HELI=NO), include Lua scripting support (LUA=YES), include support for NMEA GPS connected to AUX2 (INTERNAL_GPS=YES) and selected the type as a Release build without debug symbols included (CMAKE_BUILD_TYPE=Release). The CMake command for this is (issue the following without line breaks and be sure to include at the end the two dots and a slash exactly as here listed):

If you do not want to include the debug symbols, use -DCMAKE_BUILD_TYPE=Release instead.

To build for other radios, you just need to select another build target by specifying appropriate values for PCB and PCBREV for your radio. As a tip, which values to use, have a look at a Python script according to your radio manufacturer in a file named build-<radio-manufacturer>.py under https://github.com/EdgeTX/edgetx/tree/main/tools

The CMake generates the makefile that is required in the next step to build the firmware. For this, issue:

This process can take some minutes to complete (the parameter -j'nproc' instructs the make to use as many parallel threads as the current system has CPU cores. This speeds up the build quite significantly). If successful, you should find a firmware binary firmware.bin in the current folder, that you can flash into your radio.

It's a good idea to rename the binary, so that it is easier later to see the target radio and which options were baked into it. For this, issue in the build folder, e.g.:

You will need to prepare a clean microSD card and fill it with the content according to your radio type from https://github.com/EdgeTX/edgetx-sdcard/releases/tag/latest

The following page lists which zip file you need: https://github.com/EdgeTX/edgetx-sdcard

You can use OpenTX Companion or STM32CubeProgrammer to flash the binary to your radio. For further instructions, see: https://github.com/EdgeTX/edgetx.github.io/wiki/How-to-install-EdgeTX--(pre-release)-for-the-first-time

To build Companion binary, issue in the same terminal as opened previously:

In order to build for other radio target, you need to re-run the cmake line above, with other PCB and PCBREV tags.

Before you run the simulator, copy the SD card content according to your radio target from https://github.com/EdgeTX/edgetx-sdcard/releases/tag/latest to your system and extract it e.g. to ~/edgetx/simu_sdcard/horus

Also, you should create a radio profile first with ./companion26, before you can successfully run the full simulator.

To launch the simulator, issue: ./simulator26. In the dialog that pops up, select SD Path as data source and under SD Image Path: browse to ~/edgetx/simu_sdcard/horus 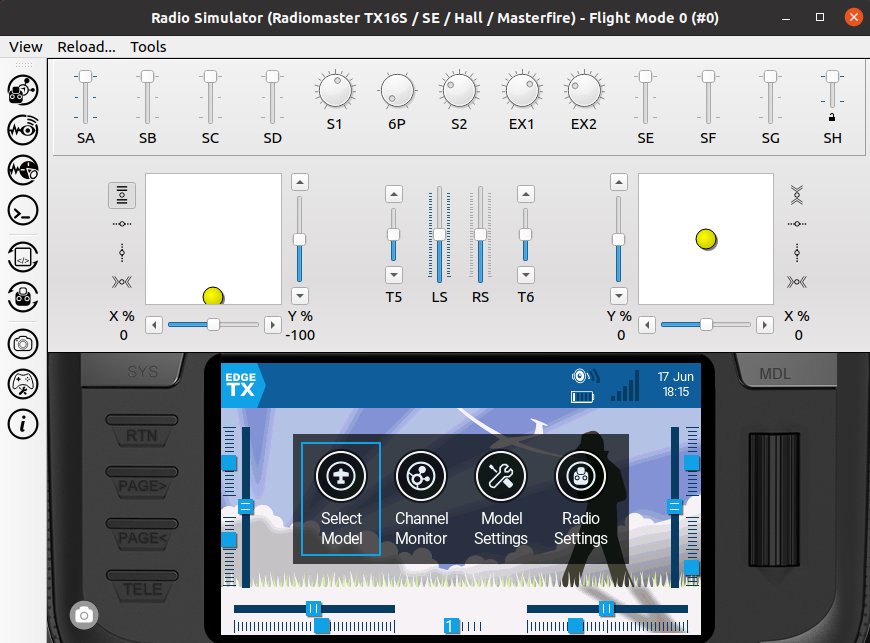